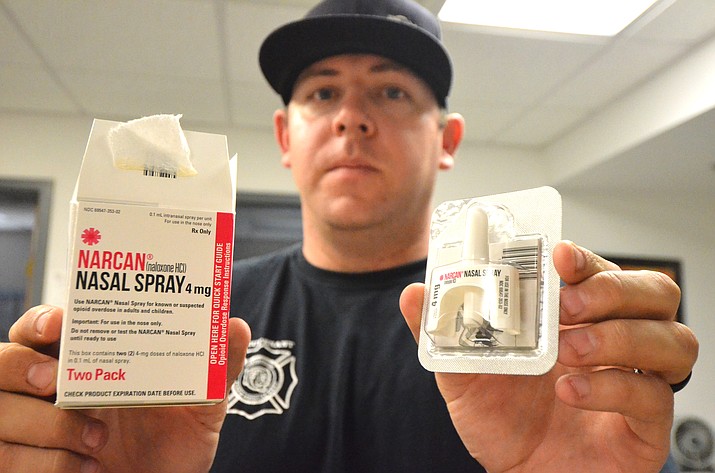 Those numbers are enough for Leslie Horton, director of Yavapai County Community Health Services, to sound the alarm.

“Our meth deaths are actually rising steadily over the last several years,” Horton said. “There’s been an extreme increase of overdose deaths in general in the last year.”

The numbers are gathered each year for the Yavapai County Overdose Review Board to study trends.

A 17-year-old Cottonwood-area teenager became the youngest person to die of a fentanyl overdose in Yavapai County last October, according to Horton.

The medical examiner and Horton were talking recently and they noticed that the average overdose deaths for Yavapai County, which have been averaging in the 44 to 47 range for the last four or five years, jumped to 68 in 2019, she said.

In addition, seven overdoses were undetermined, but involved drugs, and two are still pending final autopsy results. One was a vape death due to respiratory failure, and two were alcohol intoxication, she said

It’s an “extreme increase in my eyes” of the overdose deaths in Yavapai County, which was already a high number, she said.

The increased use of fentanyl in recent years is one reason for the increase in overdose deaths, said Horton. It’s a powerful drug that is being mixed with heroin and other drugs. Even a small amount can kill a person, Horton explained.

Besides fentanyl, Horton said she is now worried about a new increase in meth overdoses.

She said in 2019 there were Yavapai County residents who overdosed on meth alone. Other residents overdosed with a combination of meth and other drugs such as fentanyl, heroin, morphine, THC and alcohol.

There were people who overdosed just on opioids also. But “you rarely see an overdose that is just one drug.”

She attributes the increased overdoses to fentanyl and the new meth use. There is a lot of meth, it’s become stronger and it’s being laced with other drugs such as fentanyl, she pointed out.

Narcan is a game-changer

The frustration, Horton continued, is that the health community is distributing a drug named Narcan (naloxone), which revives opioid overdose victims. It does not, however, work on meth overdoses, she said.

Cottonwood Fire and Police Department officers are trained and carry nasal Narcan and Cottonwood paramedics can give Narcan intravenously.

Hoke estimated that out of the Cottonwood Fire Department’s three shifts, they have a Narcan administration about once a month on an average. “It’s definitely a life-saving drug,” he said. “It’s a game-changer, people don’t have to have a prescription to get it and they can pick it up from the county and get training on how to use it.”

Sonoran Prevention Works, a non-profit organization and advocate for people affected by drug use, gets naloxone out to the high-risk, hard-to-reach population, Horton said.

Yavapai County distributes naloxone to local governments and goes to community events to distribute and educate people about naloxone.

There is a free training with Narcan scheduled by YCHS for the Beaver Creek Library in Rimrock on March 13 at 1 p.m. Their flyer states that “drug overdose is the leading cause of adult accidental deaths in the United States.”

“It’s the one measure that can really save their life,” Horton said

Narcan will only react on a person if they are taking opioids, so if a person has passed out, and drug-use is suspected, naloxone should be administered. There are no side-effects if there are no opioids in the system.

“It has no negative side-effect if you didn’t need it,”she said.

The life-saving drug is distributed by nasal spray and EpiPen-type injections, and the shelf-life is about two years. The nasal spray can be administered to a person who is unconscious.

Horton said law enforcement has been told many success stories about naloxone. But the YCHS only gets reports of deaths by overdose and not overdoses and naloxone revivals. She said it’s up the hospitals to report overdoses that do not lead to deaths.

Horton said the illegal drugs are so powerful today it takes several doses of Narcan to counteract an opioid overdose.

A lot of the overdose deaths have a combination of heroin and meth, she said checking the overdose list for 2019.

“Everyone is unique,” she said. That’s why the overdose deaths numbers are compiled and then closely examined by the Yavapai County Overdose Fatality Review Board.

“Sometimes we see these trends,” she said referring to the new 2019 numbers. “Now it’s more meth, and heroin and fentanyl.”