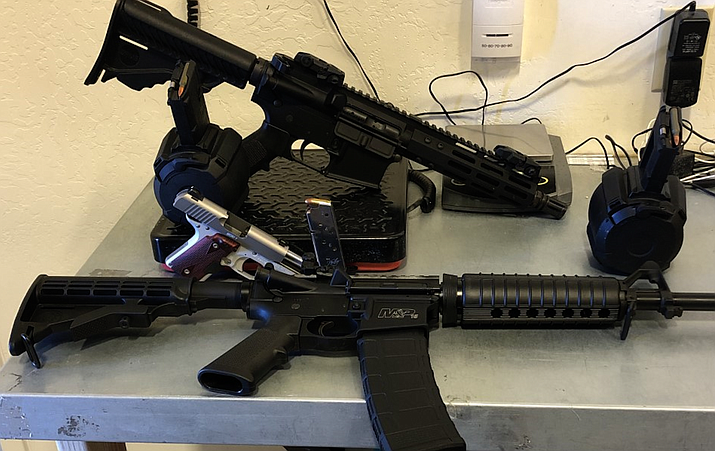 These rifles were seized this week with the help of a Yavapai County Sheriff's Office K9 deputy during a traffic stop on I-40 in the Ash Fork area. Courtesy of YCSO

A traffic stop in northern Yavapai County on Wednesday led to felony charges for three people from Texas.

On March 4, 2020, at about 8 a.m., a YCSO K9 deputy stopped a 2016 Kia Optima with a Texas plate for an equipment violation on westbound I-40 in the Ash Fork area. While speaking through the passenger window with the driver, 19-year-old Andrew Aldridge, the deputy detected the odor of marijuana from inside the vehicle.

There were two passengers in the vehicle, 18-year-old Baily Byron and 25-year-old Deven Hamilton. All three are from Texas.

While the occupants were detained, a K9 deputy searched the vehicle for the source of the odor and found 2 rifles, both .223 caliber, that were in bags in the trunk.

With the rifles were 2 fully loaded 60 round drum style magazines, a fully loaded 40 round magazine, a pair of latex gloves and a brass catcher. One of the rifles had a shorter barrel, likely in violation of federal law.

The K9 deputy also located a 9mm semi-automatic pistol in the pocket behind the driver’s seat.

As the search continued, K9 deputies found several grams of marijuana, THC wax and a half-smoked marijuana cigarette in the passenger seat pocket.

Detectives from the Partner’s Against Narcotics Trafficking task force were called out to assist. The investigation continues, but preliminary information indicates the suspects were involved in drug sales and the firearms were associated with a criminal operation.

The three were booked into the Camp Verde Detention Center on the following charges:

From the left are Andrew Aldridge, Baily Byron and Deven Hamilton. All three were arrested on felony weapons charges, along with drug charges, in a traffic stop this week in Ash Fork. Courtesy of YCSO