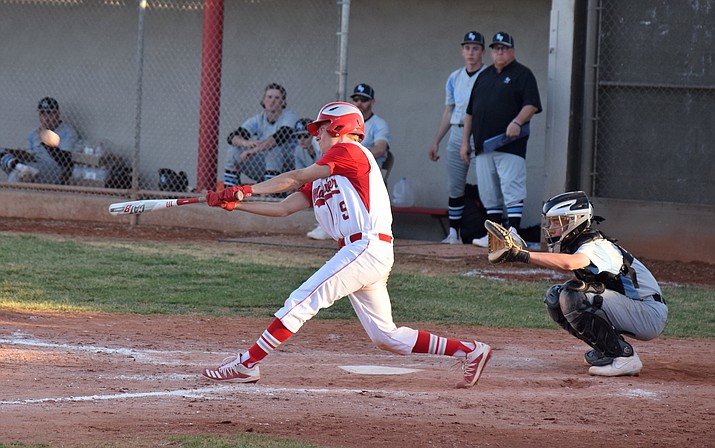 Mingus Union baseball has started the season with a losing record against mostly bigger schools but they’ve shown promise.

On Friday the Marauders’ late rally against Goodyear Estrella Foothills wasn’t enough as they lost 11-6 at home.

“Oh this is just disappointing, mostly just super frustrating,” said Mingus head coach Erick Quesada. “I felt that was a game that we could have easily pulled out but in the end a loss is a loss, so I just gotta live with that.”

At the Wayne Decombs Pre-Season West Side Invitational at Tolleson Union, the 4A Marauders (2-5) lost to 6A Phoenix Pinnacle 5-0, to 5A Raymond S. Kellis 7-2 and to 6A Tolleson Union 4-0. Mingus Union defeated 5A Avondale Agua Fria 6-4 in eight innings.

Then after dropping their home opener to Chandler Seton Catholic Prep 9-4, they beat Phoenix Greenway 6-5.

“The start’s fine,” Quesada said. “I mean we’ve played our tournament, the record shows we’re 2-5 right now but if you guys dive into the record, we’re playing 6A and 5A schools to begin with I mean we’re playing really good competition and we’re hanging with them I mean we played a really good Greenway team (Thursday), beat them, hung with the Seton Catholic, who has always just been a top dog, we hung with them and the same with Estrella. We could beat all these teams we just gotta piece it all together at some point.”

“It’s huge,” Quesada said. “It’s critical for us to see that kind of competition and just kinda see the talent that we have. It’s good for us coaches to evaluate where we’re going into the season, stuff like that and I think this preseason tournament really answered a lot of questions for us and for going forward with the season.”

“Trevor Hoke’s been killing it, he’s done a good job,” Quesada said. “Jan Alvarez has really stepped up and carried over from last year. Peter Calandra, he pitched really well for us, there’s a lot of kids who are doing a lot of key roles.”

Although Mingus Union finished fifth in the Grand Canyon last year and he said the region is good again this season, Quesada said the Marauders will be able to hold their own.

“The region’s always gonna be strong,” Quesada said. “I think our region is one of the best in the state. I think Prescott and Flagstaff and Coconino, those three are going to be really tough to beat but this year. I think we match up really well with everyone. I’m not checking off any boxes because I have all the faith in the world in these guys, they’re getting in good spots, they’re just not capitalizing when we have the opportunities, which one of these days it’s gonna turn for us and I think we’ll be fine.”

After adding large Marauder baseball signs to their field last year, they added turf to the dugout, added turf to all the batting cages and they’re getting a brand new green net across the outfield.

“We’re slowly making this ours and having an identity and wanting it to be something that the kids are proud of and take pride in,” Quesada said.

Next year they hope to add a back net to catch foul balls.

“It’ll be nice to see the facelift after a while,” Quesada said.

The Marauders travel to Phoenix Thunderbird on Mar. 16. Their next home game is Mar. 17 when they host Gilbert Mesquite at 3:45 p.m.