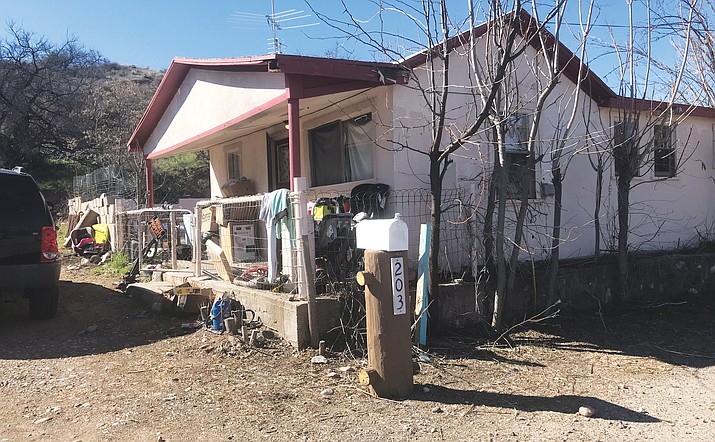 This home at 203 W. Pinal St. in Cottonwood was one of the properties owned by John T. Livingston, who signed a plea agreement last week in Cottonwood Magistrate Court for violations that include allowing a toilet to drain into a backyard. VVN/Jason W. Brooks

COTTONWOOD - A property owner pleaded guilty last week to three counts regarding his misconduct in maintaining two Old Town Cottonwood homes he had rented out.

John T. Livingston pleaded guilty in Cottonwood Magistrate Court to one count of improper sanitary drainage and one count of proliferation of weeds and waste materials at 728 N. 8th St. and one count of structure unfit for human occupancy at 203 W. Pinal St.

The plea agreement includes three years of probation and a suspended 10-month jail sentence. The probation encompasses all properties owned by Livingston; any new code violations would require him to list the property where the violation occurred within 30 days.

Livingston, 83, must also contribute $6,000 to a tenant abatement and relocation fund to be set up by the city. Initially, six-week hearing reviews of Livingston’s progress will he held.

One witness testified by phone during the plea hearing about difficulties in dealing with Livingston as a landlord. The witness said Livingston referred to himself as “the slumlord of Cottonwood” during their initial meeting, which the witness said was “weird.”

The witness, Mekonnen “Mack” Meshesha, who moved his family into Livingston’s house at 728 N. 8th St., said plumbing issues soon developed and went unresolved at the house for some time. A non-functioning toilet meant all seven family members had to share one bathroom.

Eventually, Meshesha said, Livingston got around the issue by having the toilet drain directly into the backyard. A similar blockage in a sink was resolved in the same way, with Livingston telling Meshesha “It’s OK; it’s gray water,” with that sink draining onto the property as well, Meshesha said.

The 1,400-square-foot, three-bedroom house and property at 728 N. 8th St. is currently for sale. A zillow.com advertisement listed the house as having two bathrooms.

Tyler Hall testified in person at the hearing. He told Magistrate Cathy Kelley about conditions that he and his newborn child and the child’s mother dealt with at 203 W. Pinal St.

Those conditions included a defective and damaged electrical system that caused sparks to fly from an outlet. Heating issues were so bad that the infant was kept at Hall’s parents’ home. A dog nearly froze to death, Hall told the court.

Court documents also cite broken and defective windows and hot water issues, as well as defective toilets and other plumbing.

When Kelley confronted Livingston about all of the allegations and asked if they were true, he said yes, but he thought all issues had been resolved.

Kelley told Livingston that even though he’s 83 years old, she feels he’s capable of tending to tenant needs and properly maintaining his properties.

“You seem like you’re 50,” Kelley told Livingston. “You seem very with it, and intelligent. You’re not who you’re perceived to be.”

City of Cottonwood Prosecutor Mik Jordahl said Livingston owns about 15 properties. He said about 10 complaints have been filed against Livingston over the past two years.

“The vast majority of landlords provide a really important service, and take good care of their properties,” Jordahl said. “There are only a few that don’t. Anytime tenants are at risk, if we can’t resolve things with simple code enforcement, we prosecute repeat offenders.”

Jordahl said while he deals with many misdemeanor cases at the municipal level, these address issues that are critical when viewed on a larger scale.

Editor’s Note: As a matter of policy, the Verde Independent generally does not name defendants in cases involving misdemeanor charges. Due to the nature of this case the publisher has made an exception to better alert and protect local consumers.