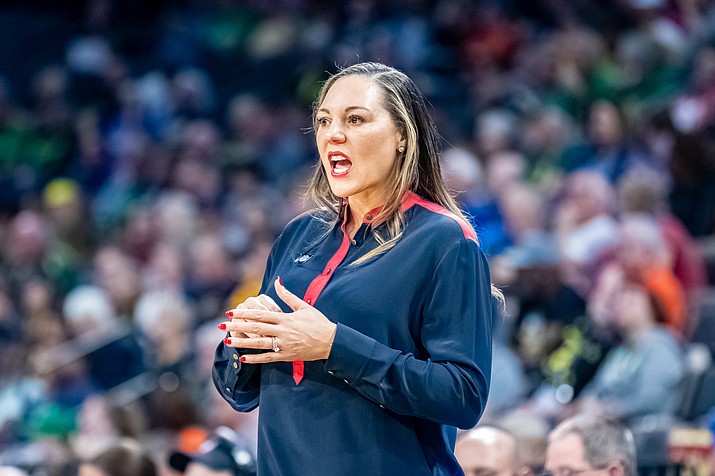 Arizona coach Adia Barnes has turned the Wildcats program around and led the team to a Pac-12 tournament victory over California in Las Vegas. (Photo by Nathan Hiatt/Cronkite News)

LAS VEGAS – Arizona coach Adia Barnes has the Wildcats on the verge of hosting the opening rounds in NCAA Tournament play, something she didn’t want her team to think about as it traveled to the Pac-12 Tournament.

It’s clear the Wildcats didn’t. No. 4 seed and No. 13 Arizona (24-6) won 86-73 against No. 12 seed California (12-19) in the quarterfinals on Friday at the Mandalay Bay Events Center, which all but secures the Wildcats the opportunity to host the NCAA Tournament in Tucson.

“It is funny,” Barnes said. “I try not to think about that a lot, you put so much pressure on yourself and the team. I didn’t think of this game as a must-win game, but it pretty much was for a lot of reasons. Our program hasn’t gone to the (NCAA) Tournament in 15 years…It says a lot.

“We are one of the few venues in the country that can bring 15,000 people to (watch) a women’s basketball team. I think we have a strong chance of doing that. With a crowd like that, I think we have a lot of momentum when we play at home. We could be in a great situation.”

First and second round NCAA Tournament sites are typically awarded to the top four seeds in the four regional sites, although it is not guaranteed if travel distance and other factors come into play.

Barnes started her Arizona tenure in complete rebuild mode and went 14-16 and 6-24, but last season the Wildcats finished 24-13 and won the WNIT against Northwestern in the McKale Center with 14,644 fans in attendance.

Everything started to change for Arizona with redshirt junior guard Aari McDonald – a transfer from Washington – and sophomore Cate Reese, the No. 12 player in the 2018 ESPN HoopGurlz rankings.

“Aari could have gone anywhere in the country,” Barnes said. “She decided to take a chance on Arizona. Remember, at Arizona I was selling a dream. We hadn’t been successful in a long time. She wanted to come here and go to war with me and she did that, and she has helped build this program.” 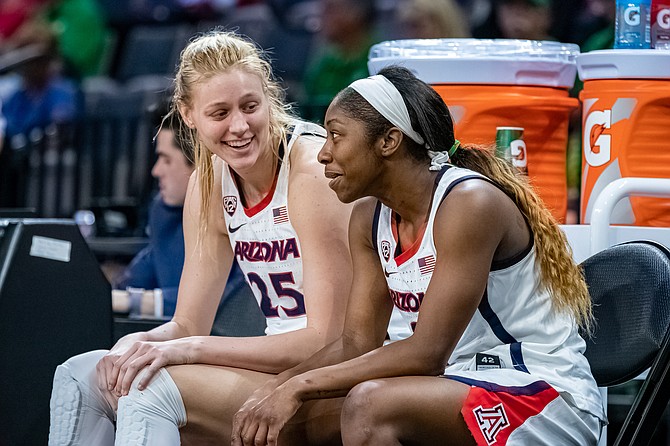 Cate Reese (left) and Aari McDonald are part of an Arizona women’s basketball team that is heading to the program’s first NCAA appearance in 15 years. (Photo by Nathan Hiatt/Cronkite News)

Reese scored a career-high 30 points against California. As a five-star recruit, Reese also could have signed with any program in the nation.

“Cate was our first McDonald’s All-American,” Barnes said. “She could have gone anywhere in the country. She chose to come to Arizona…She decided to come here, (and) do something special.

McDonald added that she decided to transfer to Arizona in part because of how Barnes builds relationships.

McDonald noted that she has known Barnes since she was a sophomore in high school.

“I knew picking Arizona would be a perfect place,” McDonald said. “It felt like a home away from home. It is just another family.”

Reese had a similar answer about her decision to come to Tucson, and she couldn’t be more happy to be there.

“I am just grateful that I made the right decision,” Reese said. “I have never regretted my decision coming to Arizona…the culture here is unlike any other. I am just happy that I made it here and that we are leaving our legacies, right now.”

Arizona isn’t just McDonald and Reese, though. The Wildcats have junior forward Sam Thomas – a player Barnes said Arizona wouldn’t be successful without – and many others pieces on the roster.

Barnes said she believes that Arizona has a complete team, which translates into the Wildcats successful season and Top 15 ranking. Barnes added that Arizona can have a different player step up any game, but every player plays a specific role.

“We have done that all (season), and no one thought we would be where we are,” Barnes said. “They believed. I believed, and that is all that matters to us. … We are kind of babies in the (Pac-12) Tournament and will be in the NCAA (Tournament). But I think with their confidence and their heart and passion, we can beat a lot of teams.”