IT’S COMING: County health expert says it’s not a matter of if, but when coronavirus will arrive 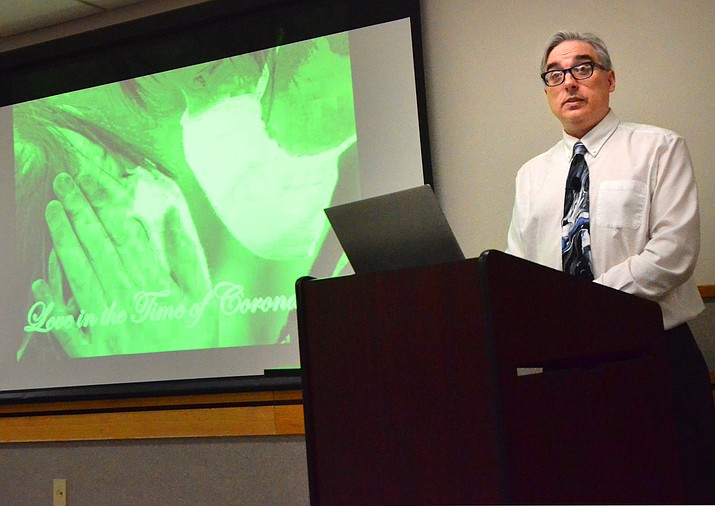 Yavapai County Health Department Epidemiologist Stephen Everett speaks at a community meeting about coronavirus at the Cottonwood Library. The turnout may have been small because people don’t want to be in large groups, but it was fed live on the internet. VVN/Vyto Starinskas

My Movie 15 by Verde News

“We have plans for this. Totally practiced them,” explained Everett during a Thursday meeting at the Cottonwood Library. “This is something we are expecting.”

Everett said three people have been tested for COVID-19 in the county and no one has tested positive as of Thursday morning.

“We don’t have enough test kits to test everyone,” he said, adding that such testing would overwhelm the labs.

“It’s going to come in. We are protecting as best as we can,” Everett said.

Schools and colleges most likely will have to be closed, he said.

“With schools, if we start seeing cases, the decision will be made whether to close schools or not, but more likely or not, schools will be closed,” Everett said.

If there is a sustained spread in a community, he continued, and if having the school closed isn’t any benefit, then the schools may reopen “just so parents can go to work.”

Everett said all the schools and colleges in the county would not necessarily close at once. It would depend on which side of the county got the coronavirus first.

The epidemiologist said the coronavirus will have an impact on tourism in Sedona because the town attracts so many out-of-state and foreign tourists who are flying.

”That’s the kind of situations politicians have to deal with,” Everett said. There has to be a balancing act in protecting the public. He referred to the scene in the movie Jaws between the mayor and sheriff.

“I would imagine tourist season will fall off,” he said, “Especially with your international crowds.” He pointed out that tourists from Europe won’t even be able to get into the country with President Trump’s new travel ban.

“It’s entirely possible domestic flights will shut down as well,” he said.

“If you’re getting people from all over the world, I would say cancel. If they are from around the country, and they are on airplanes, yes, you probably should cancel,” Everett said. “If it’s just everyone in Cottonwood, Sedona, and you know all the people, go with it.”

“We have no idea what it’s going to be like,” he said. “We don’t know if it will last throughout the summer. There are no antivirals or vaccines for COVID-19, and the ones in development will take time.”

He said the elderly and those with pre-existing medical problems are mostsusceptible, and that children don’t seem to be getting coronavirus.

Everett said people should avoid shaking hands. He this is a good time to get habits formed for things like the “elbow bump” or a “foot shake, and making sure you wash your hands often, wipe down surfaces.”

Asked if people are panicking, Everett said he had two words to explain his answer: “toilet paper.”

“And others are like it’s not a problem and thinking it’s a hoax,” he said. “It’s not a threat here as of yet, but it will be.”

“Kind of think of it like a tiger,” he explained. “If you’re on one side of the cage, you’re pretty safe even though that thing’s dangerous. If you’re on the inside, it’s still definitely dangerous, but you’re more in harm’s way.”

“The closer you are to the tiger, the more worried you should be.”