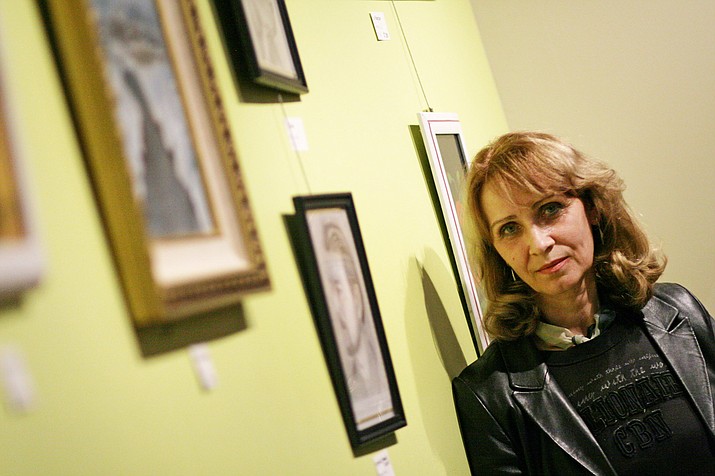 Since 2015, Natallia Robinson has lived in the Verde Valley. The artist and former Belarus resident moved to the states to be near her youngest son, now an interpreter in Phoenix. VVN/Bill Helm

RIMROCK — Natallia Robinson can see animals, mountains and quite the diversity of vegetation from her Rimrock home.

The “beautiful nature of Arizona,” she said, inspires her to paint.

But art isn’t why Robinson moved more than 5,800 miles from her homeland of Belarus to the Verde Valley.

Her youngest son, Valentine, came to the states to study international politics at Northern Arizona University.

Now an interpreter in Phoenix, Valentine is still barely 100 miles from Robinson. Valentine, she said, has also helped her become better with her English.

“I learned English with him, five to six hours a day,” Robinson said. “He was my first teacher. His English is excellent.”

Sergei, her older son, still lives in Belarus, as does her mother. Robinson said she misses them, but that she’s happy in the states.

Robinson said she will be happier once her English is better and she has an opportunity to return to the medical profession she spent 33 years in as a physical therapist.

“I wanted to become a professional athletic coach, because I loved sports,” she said. “But my best friend was able to convince me to get a medical education.”

Robinson is studying English at the Camp Verde Adult Reading Program. One of the aides, Robin Whatley, said that Robinson is learning English “due to her hard work.”

“She’s incredibly self-motivated, she has great attention to detail, she’s always on time, and she looks forward to class,” Whatley said.

It’s special, Robinson said, to study at the same library that displays two dozen of her paintings.

She still remembers her first drawing, back in kindergarten.

“A drew a girl who was pulling a sled with a rabbit on top,” she said.

Once she arrived in America, Robinson became more active in her art. Besides the beauty that surrounds her home, Robinson also observes “the movement of the shadows in the mountains created by the sun.”

Robinson works with oil, acrylic and pencil, on canvas, wood and cardboard. But it is a “rich colorful palette and variety of genres” that make her paintings entirely hers.

Robinson said she hopes this year to take part in the Sedona Arts Festival.

“My friend said that Sedona is the heart of the universe,” she said.