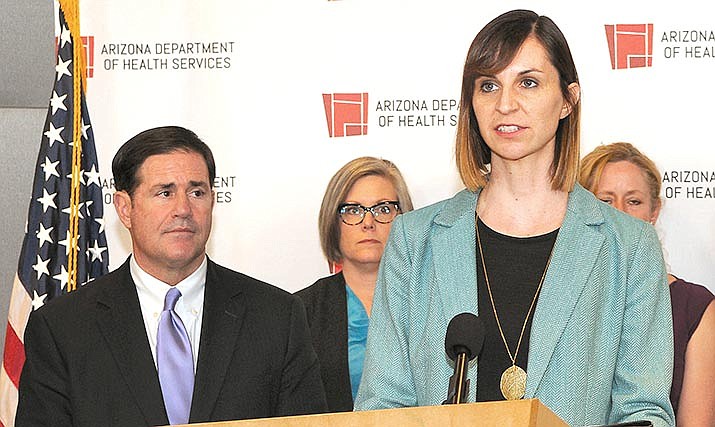 State schools chief Kathy Hoffman discusses Monday what might happen if schools cannot reopen before the end of the school year. With her is Gov. Doug Ducey (Capitol Media Services photo by Howard Fischer)

Gov. Doug Ducey has a word of advice: Don't.

And both the governor and state Health Director Cara Christ warned about other public places, anywhere indoors where there are likely to be at least 50 people.

But the governor stopped short of issuing any sort of closure edict as have some of his counterparts in other states.

"Our circumstances in Arizona today are different,'' he said.

-Defended the decision to go ahead with Tuesday's primary vote;

-Discussed the possibility that schools might not reopen in two weeks;

But much of the focus was on how people can best protect themselves and, if they are infected, avoid spreading COVID-19.

"If you're thinking of going out to a crowded bar to celebrate, our advice is: don't,'' the governor said.

"Social distancing or personal distancing is one of the greatest measures you can take to stay safe,'' Ducey said. "And that's hard to do at a bar.''

"We are encouraging right now that gatherings over 50 be limited,'' Christ said.

The specifics, however, are more complex than that. Consider, she said, a gym or health club.

"With a gym it is possible to social distance,'' Christ said. There also are considerations like whether there are cleaning supplies to wipe off the equipment after someone else has used it.

That still leaves the question of why not simply preclude the risk and order these kinds of gatherings outlawed. Ducey said he's not ready to go that route now.

"I'm focusing every day on what's the best decision for the state of Arizona,'' he said, saying he's relying on the latest "data, the facts and the science'' to make future calls.

"This is where we are today,'' the governor continued. "And it will change.''

Christ agreed that to this point the state's position is simply advising people to stay away from gatherings of 50 or more people.

"That would include, potentially, malls, festivals, parades, concerts, those types of things,'' she explained. But she sees no reason for a legal prohibition.

For example, she said, there may be ways to "social distance'' in restaurants, allowing people to eat out without being at risk of coming into contact with someone who may be infected. Anyway, Christ said, closing restaurants makes no sense as it would eliminate things like drive-through service.

Tuesday's other big activity is the presidential preference election.

"We understand the apprehension that voters have right now,'' said Secretary of State Katie Hobbs.

But she said that local health and election officials, along with those in the Democratic Party, believe the election should go forward. What it comes down to, Hobbs said, is a lack of better options.

"What it all comes down to is we have no guarantee that there will be a safer time to hold this election in the year future,'' she said. And Hobbs said that, to the extent possible, election workers will try to create proper "social distancing'' for those involved.

"Our intent at polling places ... is to get people in and out,'' she said. And even for those who do not have ballots that can simply be dropped off, Hobbs said actually getting out and voting should not take long.

Kathy Hoffman, the state superintendent of public instruction, said she is monitoring the issue of when schools should reopen.

On Sunday, Hoffman and Ducey shuttered public schools for two weeks, encouraging districts to provide online instruction as necessary. They also said arrangements are being made both for where parents who cannot stay home can leave children and getting them meals.

But Hoffman said there is no guarantee that schools will reopen on March 30.

"The situation is constantly evolving, minute to minute, hour to hour,'' she said.

Hoffman said she had a meeting with education leaders to figure out what are the immediate needs. More to the point, she said they are looking at scenarios.

During Monday's press conference there also were questions about testing, both who can get it and what is the cost.

On the former, Christ said tests are being offered only to those who show some symptoms. But the health chief said she has signed a standing order allowing private health labs to conduct tests on those who sign statements saying they do have symptoms.

But unlike other states, tests will not be automatically available for those without symptoms.

Christ said that insurance companies have agreed to waive copays and deductibles for those who fit the category of those who should be tested. But for those without any insurance, she could say only that the state is looking at the issue.

The outbreak has resulted in one clearly non-health issue: hoarding.

Aside from stores having no supplies of things like hand sanitizer and wipes, shoppers are stripping shelves of everything from pasta and soup to toilet paper and cat food.

"The fear that's out there is very real,'' the governor said. But Ducey also said he believes all this is an overreaction.

"The supply chain for Arizona and for the United States of America will be protected,'' he said. And Ducey said that he has been assured by executives of grocery chains that supplies will be replenished.'

"So I would encourage people to buy what they need so that their neighbor can have toilet paper and necessary things for their food pantry as well,'' the governor said. About the only situation where he said someone should stock up is where there is an underlying health situation and people might want to keep a supply of prescription and over-the-counter drugs on hand.