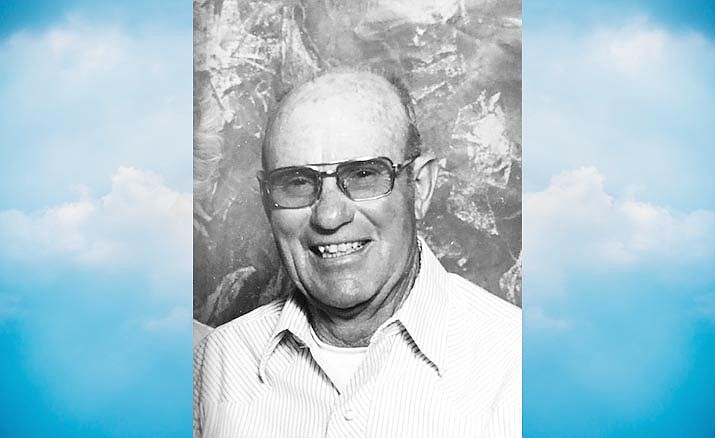 Rusty entered the U.S. Navy at the age of 18 and was stationed on the USS Kwajalein (CVE-98) at the end of WWII. He returned to Jerome in time to graduate from Jerome High School in 1947.

He worked at the PD mine in Jerome for a year and then attended Arizona State College, now ASU.

In April of 1949, he and Barbara Hollingshead of Jerome were married and moved into one of the married housing areas for GIs at ASU. He graduated in May 1952 and began his first teaching and coaching job at Peoria High School in Arizona.

In 1954, he and Barb returned to the Verde Valley (Clarkdale), where he taught social studies and coached all sports at Mingus High School, which became Mingus Union HS in 1958. He was very proud of being MUHS’s first head football coach.

They moved to Sierra Vista, Ariz. in 1959, with their four children. Rusty taught, coached and was the athletic director at Buena High School until he retired in 1983.

When Barb retired in 1985, they moved back to the Verde Valley and built a home in Cornville, where he and Barb lived until her death in 2016. He remained in their home until moving into Cottonwood in 2018.

Rusty and Barb enjoyed many adventures camping and exploring, from Alaska to Quebec to Florida and places in-between. They could be found watching any and all of their children and grandchildren playing whatever sport they were involved in, traveling hundreds of miles to do so.

Almost every summer for nearly 60 years, they spent time in southern Colorado on the Dolores River, where Rusty cooked many a Dutch-oven biscuit over the campfire for family and friends.

At this time, no service or memorial has been planned for Rusty.