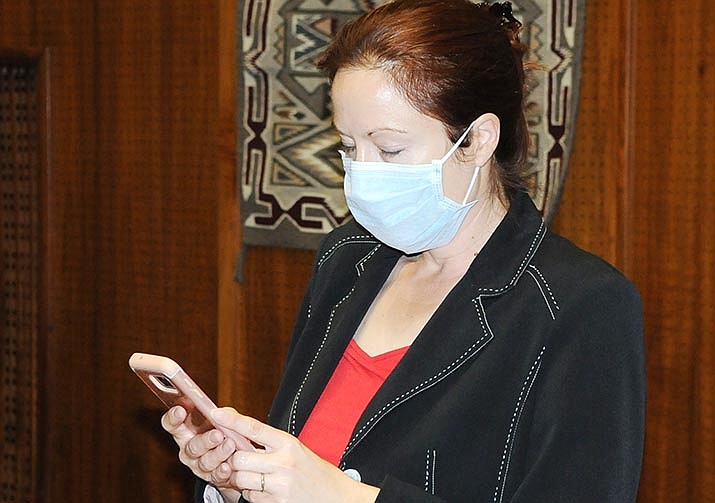 PHOENIX - State lawmakers are weighing contingency plans in case public schools do not reopen soon -- or at all this school year.

SB 1693, introduced late Wednesday, spells out that if classes resume by March 30 there is no requirement for school districts to make up the lost days. It also would extend the window for required statewide standard assessment tests through the end of May.

That March 30 date is not chosen by happenstance. That is the date that Kathy Hoffman this past Sunday for reopening following a two-week closure in response to the spread of COVID-19 and the fact that both teachers were calling in sick, leaving many classrooms without someone to lead them.

But the legislation crafted by Rep. Michelle Udall, R-Mesa, and Sen. Sylvia Allen, R-Snowflake, has no such assumption that the emergency will be over by then.

If kids are not back in school March 30, their measure would suspend state laws that require there be a certain number of school days and instructional hours. It also would cancel the annual statewide achievement tests for this year and ensure that the letter grades now assigned to each school do not decline.

But the most significant part would be to require public schools to offer education services "in alternative formats'' if they want to get their state aid. And it would allow schools to continue to pay employees to work from home or perform alternative assignments through the end of the school year.

"Our students can't afford to lose the last quarter of the school year," Udall said in a prepared statement. "We trust our educators and school leaders to do everything in their power to ensure students have the stability and the opportunity to continue to learn during this challenging time.''

Richie Taylor, spokesman for the state Department of Education said his boss, state schools chief Kathy Hoffman, is still reviewing what was introduced to see how it would work.

"We don't have a lot of answers,'' he said. But one big question, Taylor said, deals with the question of online learning.

"Even in urban areas there are lots of students that don't have access at home,'' he said.

Joe Thomas, president of the Arizona Education Association, said the legislation does provide a lot of flexibility.

He said it can include online lessons for students with access to computers. But Thomas said it also provides the opportunity for teachers also to prepare and send home packets of materials for students to review.

Thomas said there is no real reason that many things cannot be taught remotely.

"You can take the SAT test online,'' he said.

But that, Thomas said, requires months of preparation, something the state does not have.

"The trick is, we're in kind of uncharted territory,'' he said. And that, said Thomas, will require some creativity by educators.

The easiest situations to take care of, he said, might be for specific subject teachers. Consider, Thomas said, someone teaching social studies and lessons for the next two weeks involve the Civil War.

"Send out some readings, some assignments, some enrichment activities,'' he said.

That last category, Thomas said, could be viewing a movie -- one that would be interesting enough for a parent to also enjoy and then be able to discuss the issues with a child.

And he said this isn't a one-way street.

Students could show what they know, for example, by preparing and sending back a journal. Even an open-book test is an option.

"They'll get that back to us, either email or some kind of form online or a packet,'' Thomas said. "And we'll grade that and that will be the grade they get for the assignment.''

Udall, however, told Capitol Media Services there's no reason that this kind of learning won't work for students in lower grades.

"I think this is a good opportunity, especially for those younger kids, to really hone in on some of those basic skills that, at this time of the year, can be reinforced,'' she said. That involves a lot of reading, a lot of practicing math.

"I mean, you can have a kid read to you over the phone,'' Udall said.

High school seniors present a bit of a different problem as they want to get a diploma that will actually allow them to get into college. The legislation allows the state Board of Education to adopt rules to ensure that happens.

"What we figure is if a student is on track to graduate this year that we're not going to do anything to prevent them from graduating,'' Udall said.

For example, Udall said, a school district may have money it received from the state which is earmarked for student transportation. With no need to use those dollars that way, the measure permits district officials to reallocate it to other priorities.

The legislation could be debated as early as Thursday.