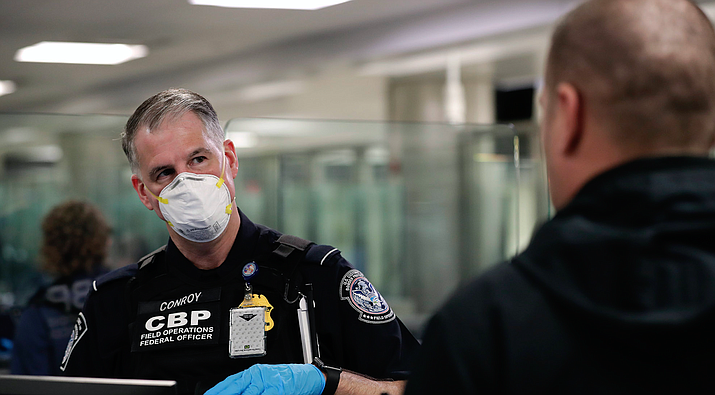 WASHINGTON, D.C. – Border officials will start turning away all undocumented migrants and asylum seekers beginning Saturday, in what President Donald Trump called an effort to protect “our border agents, migrants and to the public at large” from COVID-19.

The move, announced in tandem Friday with new restrictions on travel to and from Mexico, was defended by administration officials who said that continuing to detain and process migrants presents too high a risk of disease transmission.

But advocates derided the health justification for the order, accusing the administration of using COVID-19 as a pretext to demean immigrants while diverting attention from their own handling of the crisis.

“The president is trying to change the subject and get people talking about the border and immigrants and foreigners, as opposed to masks and tests and hospital beds,” said Douglas Rivlin, a spokesman for America’s Voice, an immigration advocacy group. “What it does is shift the attention away from the White House’s handling of this issue.”

The order was announced Friday at a news conference of the White House coronavirus task force, where Trump was flanked by the vice president and the secretaries of State, Homeland Security and Health and Human Services, among other officials.

The policy, to take effect after midnight Friday, calls for any undocumented individuals caught crossing over the border or presenting themselves for asylum to be returned to their home countries “without delay.”

Administration officials said the decision was based on a Centers for Disease Control and Prevention finding that Customs and Border Protection facilities where undocumented migrants and asylum seekers go after being detained, are not capable of handling a coronavirus outbreak.

“CBP facilities were never designed to hold large numbers of people and to protect agents and migrants from infection during a pandemic, nor to treat them for a novel virus if large numbers are infected,” said Health and Human Services Secretary Alex Azar.

Trump said the action was the result of a CDC order that gives “the CBP the tools it needs to prevent the transmission of the virus.” He said undocumented immigrants “threaten to create a perfect storm that would spread the infection to our border agents, migrants and to the public at large.”

“As we implement the CDC’s order, we will take a number of individuals across the border and repatriate them back to Mexico, back to the Northern Triangle and into any other country,” Wolf said.

But critics said the policy will only hurt already “vulnerable communities.”

Rep. Ann Kirkpatrick, D-Tucson, said in a statement that while she agreed with the need to restrict some international travel, “pushing families into Mexico or detaining families will not stop the spread of this virus.”

“I just worry that what we’re going to have is a no-man’s land or public health crisis where no one wants to deal with these folks,” Schacher said.

She said these sorts of camps have led to horrible human rights situations, citing migrant camps in Greece “where you’ve got violence breaking out, you’ve got real animosity toward migrants, you’ve got terrible conditions.”

“We are not sending them back to Mexico, we are sending them to their own country,” Wolf said. “Why would Mexico take people not from Mexico?”

Trump said the pandemic, and the national emergency he subsequently declared, help clear the way for action on the problem of illegal immigration.

“Every week our border agents encounter thousands of unscreened, unvetted and unauthorized entries from dozens of countries and we’ve had this problem for decades,” Trump said. “But now, with the national emergencies and all the other things we’ve declared, we can actually do something about it.”

But Rivlin said the threat of migrants spreading coronavirus was much less than Trump claims.

“They’re trying to send a signal that they think immigrants are full of diseases,” Rivlin said. “This is a disease where there are more cases in the United States than there are in Latin American countries.”

Border officials use COVID-19 fear to turn away 6,306 at southern border
DHS to send migrants from Tucson to El Paso, to be sent back to Mexico
Family apprehensions at border less than adults apprehended in October
Close to 1 million apprehended at southern border in fiscal 2019
Taking flight: 100 Angels nonprofit provides medical relief to migrant families
Event Calendar