PHOENIX - Gov. Doug Ducey wants federal dollars and an expanded role for the Arizona National Guard, saying the citizens, economy and infrastructure of the state have been "catastrophically affected'' by COVID-19.

"The State of Arizona resources are being overwhelmed and additional federal funding is critical," Ducey wrote in a letter Friday to Defense Secretary Mark Esper. "This event has caused and continues to cause widespread effects (both known and unknown)."

The governor's letter went out the same day that he and Maj. Gen. Michael McGuire had a press conference to explain the role that Guard troops, called out by Ducey the day before, would play.

Both emphasized that they were there for logistical support, largely to help restock the shelves of grocery stores that had been stripped bare of many items by people who were hoarding.

"We can do big-scale logistics,'' said McGuire, the adjutant general of the Arizona National Guard. He said that particularly mean moving large quantities of food "that final mile'' between warehouses and grocery stores.

What was not mentioned at the time was that Ducey was telling Esper that he foresees the need for up to 5,500 troops and an even larger role for the Guard, including:

-Provide a reserve of medical providers.

But Ducey said it may not stop there, saying troops could provide "additional assistance (which) may also include future support to local law enforcement.

The governor said, though, duties would include those "not impeded by Posse Comitatus."

That 1878 law prohibits the use of the military to enforce the law or suppress civil disorder unless expressly ordered to do so by the president. But the governor said that those limitations do not apply when Guard troops are "under state command and control.''

Ducey did not explain what role he wants them to play but only that they are needed -- and the federal government should come up with some cash.

Gubernatorial press aide Patrick Ptak denied late Sunday that his boss was withholding information from the public about conditions in Arizona or the role Ducey wants the Guard to play.

"This letter is intended to secure an offset from the federal government for National Guard activity here in the state,'' he said. And Ptak denied that his boss is either not telling the whole story to Arizona residents or to the Pentagon whose dollars he is seeking.

"We've been straightforward about what we expect them to do,'' he said, calling the letter and the verbiage "something we have to do'' to draw down federal dollars.

When Ducey wrote the letter to Esper he told the Pentagon chief that Arizona had 44 confirmed cases and no known deaths. As of Sunday afternoon, that number had reached 152 with two deaths, including three cases in Yavapai County. 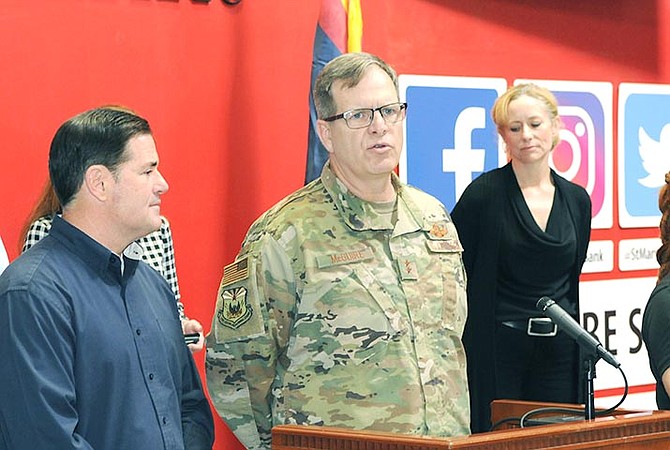