Business NOT as usual: Entreprenuerial spirit alive and well in VOC despite COVID-19 restrictions 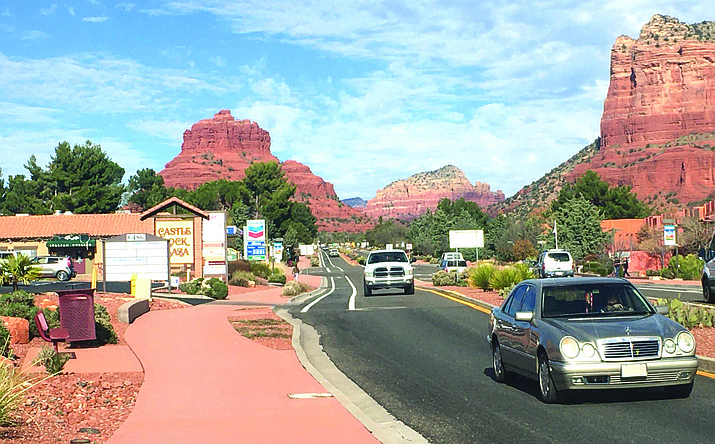 VILLAGE OF OAK CREEK — John and Nikki Ramagli will remember 2020 as the year their businesses went complete off-road, in terms of facing challenges that aren’t on any business road map.

Of course, the COVID-19 virus pandemic and its business impact pose challenges practically no business owners have ever seen.

“We’re treading water,” said John Ramagli, who, along with his wife, own both J Wine Bistro and Rotten Johnny’s Pizza in The Collective Sedona. “This all happened pretty fast, and it’s been tough on everyone.”

The adjustments businesses in the Village of Oak Creek are, in some ways, the same types of adjustments being made worldwide to stop the spread of the COVID-19 virus, and in other ways, are very unique. Hitched largely to a tourism trade that has been stemmed by the public being generally wary about travel and dining out, and also by World Health Organization recommendations, bars are shut down, and wine and food establishments have had to resort to carry-out and delivery options.

Yavapai County Supervisor Randy Garrison said he has seen and heard, for the most part, that most businesses in the county complied immediately with Arizona Gov. Doug Ducey’s March 20 order that closed bars and on-site eateries in counties that have at least one confirmed case of COVID-19 (Yavapai County had three as of March 24, including two in Sedona).

While Garrison said he hadn’t looked into which agency would enforce such a restriction or how that would be done, he planned to do so. He also said it’s uncharted territory for both business and government.

“One benefit to these shutdowns will be that we’ll make better use of methods we hadn't utilized much before, and find new pathways where none existed,” Garrison said. “Some businesses will be really creative and will find ways to still serve customers that still help stop the spread of the virus.”

Ramagli said his pizza business didn’t have to make many adjustments, other than to make room for J Wine Bistro’s equipment and food, as he closed the Bistro and moved its inventory into Rotten Johnny’s, reshaping the kitchen slightly.

“It hasn’t gone great, but we’re getting it done,” Ramagli said. “There have been lots of adjustments with the bistro food, especially making it to-go. You can’t shove lamb chops and ribeyes and filets into pizza boxes. We’ve had to find the right kinds of containers.”

Hotel business in the Village of Oak Creek appears to have dropped off considerably. An online search for rooms showed Bell Rock Inn and Suites advertising rooms for as low as $57 — an unheard-of sale price during the “spring break” run that is typically the busiest travel season for the Sedona area.

A manager for the village’s newest hotel, the Westin Element, said during a phone inquiry that the hotel is open for businesses, but when asked how many rooms were booked, said those details couldn’t be discussed publicly and abruptly hung up.

Garrison said he knows not all businesses in the area will weather the storm of an ordered closure. He pointed out that the Small Business Administration and other agencies will offer loan or grant programs.

“The investment in remaining healthy and stopping the spread of a virus is a tough one to make,” Garrison said.

Ramagli said he and his wife, Nikki, opened J Wine Bistro in 2016 and Rotten Johnny’s in 2018 with the intention of succeeding. He is not able to employ as many staff as he would like, with he and Nikki accompanied by six workers.

Ramagli said he puts in 13-hour days trying to keep both businesses going.

“We expect to make it through this,” he said.