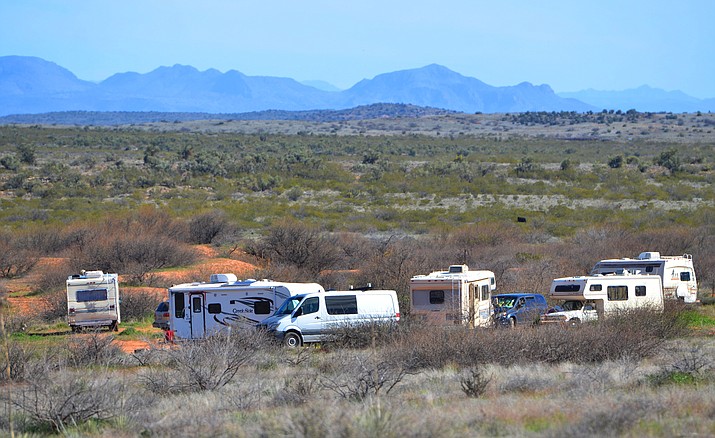 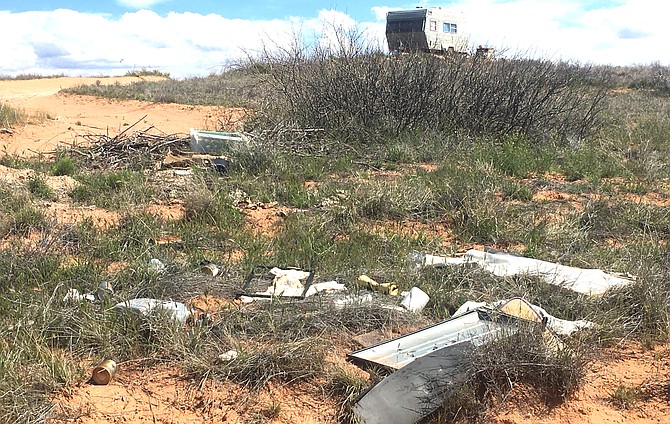 Brady Smith, public affairs officer for the U.S. Forest Service in the Coconino National Forest, says “Trash has been -- and will likely always be -- a challenge and problem on national forests and public land, in general. Our folks encounter trash, feces, furniture, trashed vehicles, and all sorts of garbage on the national forest.” VVN/Vyto Starinskas

Jerome Vice Mayor Sage Harvey noticed the increased glow of campfires toward Sedona as she looked out over the Verde Valley from her home last weekend.

The campfires turned to smoke in the morning.

“Saturday at dusk, I watch approximately 50-60 vehicles come down Boynton Canyon to the river in Clarkdale,” said Harvey.

Harvey said the campfires died down a bit by Thursday but “absolutely” the number of campers has increased since the coronavirus crisis began just two weeks ago.

There is an increase of campers on local Coconino National Forest Roads such as Bill Gray Road, and Forest Road 525 and it’s putting stress on the forest, explained Yavapai County Supervisor Randy Garrison Wednesday.

The forest service and cattle ranchers have informed him that there are more campers since the coronavirus crisis began, Garrison said.

They are more of residential users than traveling campers. But these areas are already being over-used, he pointed out.

“It’s homeless,” he said. Or people who need or choose to live out of their cars because there is no housing. “From what we’ve been told is that the residential-use has increased lately.”

The Prescott National Forest closed open camping along the State Route 260 corridor last year, Garrison said, so that moved all those dispersed campers over to Coconino National Forest.

The PNF Verde District has removed between 2,000 and 3000 pounds of trash, some of it construction debris, from dispersed areas in its forest since January, said Palmer.

Unrestricted camping in the area exceeded the land's capacity to remain healthy, said the Prescott National Forest at the time.

Now, Garrison said a similar thing is happening at some of the roads in the Coconino Forest. His supervisory district is overlapped by the Coconino and Prescott national forests.

“Visually, it’s reasonable to come to the conclusion that camping has increased, but whether or not that is due to the virus is not known to us,” explained Brady Smith, public affairs officer for the U.S. Forest Service in the Coconino National Forest.

“We don’t keep track of the reasons why people camp where they camp,” he said. But camping has increased at all national forests.

“The areas around Camp Verde, like West Sedona and the Mogollon Rim, are very popular spots for camping. We have seen an increase over the years across the national forest, including those areas,” Brady said.

Palmer worries that the social-distancing requirements -- limited contact by forest employees, less enforcement and the closing of developed campgrounds -- will lead to undesirable behaviors.

“Trash has been -- and will likely always be -- a challenge and problem on national forests and public land, in general. Our folks encounter trash, feces, furniture, trashed vehicles, and all sorts of garbage on the national forest,” Brady said.

Brady said he did not know of any plans to close any roads or corridors in the Coconino National Forest as Prescott has.

A lot of residential campers are also cutting fences and leaving gates open, Garrison added. Cattle are getting out on the road and getting hit because the gates are getting left open.

Besides Bill Gray and FR525, campers are congregating on FR 9845 (across from the Sedona wastewater plant), the forest road near the Cornville Road switchbacks, Beaverhead Flat Road and even on Sycamore Canyon Road. Everything on the Coconino side is getting “hit pretty good,” Garrison said.

Palmer said the Verde Recreation Action Plan by the PNF is currently being developed. The public meetings to discuss the plan will be delayed until the fall of 2020 due to the virus.

The action plan will obtain input from the public on how best to manage dispersed and developed recreation within the Verde Watershed and how to manage effective closures, signage, barriers and enforcement, all which require staff, which is very limited on both forests, Palmer said.

Garrison said the best solution to the camping problem is “enforcement.”

Both the Coconino and Prescott national forests have brought on additional law enforcement officers, he said. So they will have a bigger presence.

The dispersed camping limit is 14 days per forest, Garrison said. Some people move from one forest to the other. Some people camp in tents, some in RVs.

The forest service and the sheriff’s department are working on different uses of technology on tracking the users and now long they are staying, Garrison said. Law enforcement may even look at drones, he said.

The Prescott and Coconino National forests closed its developed recreation and day-use sites earlier this week.

This closed more public bathrooms and will put more pressure on the dispersed campers, Garrison said. The campers were going to the gym and rec centers for showers and forest bathrooms, but those have been shut down too, Garrison pointed out.

It’s just going to put more pressure on the forests, he said.