Petition to get 'dark money' initiative on ballot falls short 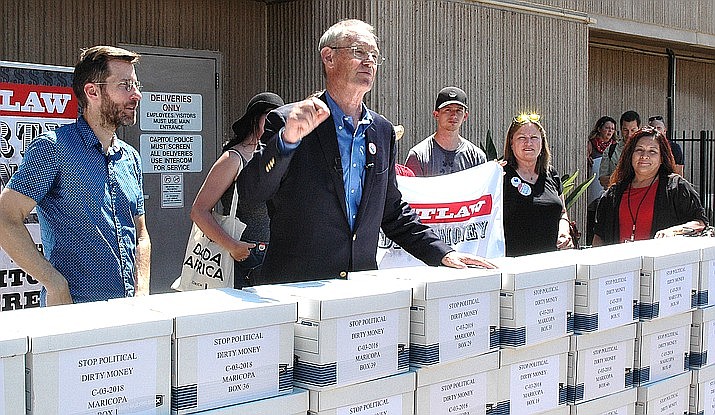 Terry Goddard, one of the co-chairs of what is formally known as the Citizens Right to Know Initiative,'' said that, as of Thursday, after a year of being on the street with petitions, they were about 81,000 names short of the 356,467 valid signatures needed to qualify for the ballot. (Capitol Media Services file photo by Howard Fischer)

PHOENIX - Arizonans likely won't get to decide this year whether they want to ban anonymous contributions to political campaigns.

Organizers of the Outlaw Dirty Money campaign announced Thursday they are suspending efforts to gather the signatures needed to put the issue on the November ballot. The move comes amid public health calls to minimize person-to-person contact, something that is necessary when circulators approach people to sign petitions.

Terry Goddard, one of the co-chairs of what is formally known as the Citizens Right to Know Initiative,'' said that, as of Thursday, after a year of being on the street with petitions, they were about 81,000 names short of the 356,467 valid signatures needed to qualify for the ballot.

But Goddard said they were still on track to meet the July 2 deadline what with a contract for paid circulators and what he said was 300 volunteers who were ready to go out earlier this month during the presidential preference primary to gather signatures.

The initiative would create a "right to know'' provision in the Arizona Constitution requiring public disclosure of the name and address of any individual who has put at least $5,000 into influencing the outcome of any election, whether directly or indirectly.

It would apply not just to donations directly to candidates, which essentially already is covered, but also donations to political action committees which then make their own contributions to candidates solely in the name of the group.

But the more significant provision applies to so-called "social welfare groups'' that now can spend unlimited amounts of money on TV ads, mailers, billboards and phone calls both for and against candidates as well is supporting and opposing ballot measures. That would override a law approved by the Republican-controlled Legislature exempting those groups from having to disclose their donors.

That initiative is unlikely to be the only one endangered by the reticence to seek person-to-person signatures.

Backers of a measure to impose new minimum wage requirements for hospital workers and to require insurers to cover pre-existing conditions paused their own petition circulation campaign earlier this month. And signature gathering has been halted a group seeking changes in election laws, including automatic voter registration and tightening the limits on what lobbyists can give in gifts to public officials.

Not every ballot measure is in trouble.

Stacy Pearson said the Smart and Safe Arizona initiative to legalize the recreational use of marijuana by adults already has collected more than 320,000 signatures, with just 237,645 of those required to be found valid. She is vice president of Strategies 360 which is helping run the campaign.

Less clear, Pearson said, is the fate of two other ballot measures being handled by her firm.

One is the Invest in Ed proposal which would put a surcharge on income of individuals making more than $250,000 a year to raise nearly $1 billion annually for public education. The other is the Second Chances, Rehabilitation and Public Safety Act which would give judges more discretion when imposing criminal sentences and increase the number of credits that inmates could earn toward early release.

"We're actually experimenting with some options to find the best way to both legally and safely collect,'' Pearson said. She said that might involve taking petitions to someone's house, stepping back and letting them sign with their own pen.

Any procedure would have to comply with an Arizona law that requires those who circulate petitions to signed affidavits saying they actually have witnessed the signature.

Goddard said there is a way to salvage not only his initiative but others that have been sidelined by COVID-19: Have the Legislature allow signatures to be gathered online.

"It's just basic fairness,'' he said, pointing out that state lawmakers voted to allow themselves to gather signatures for nominating petitions electronically. To date, however, no bill to expand that has ever gotten a hearing.

"We've got a situation here where they treat themselves royally with access to electronic signatures,'' Goddard said.

"But they don't let anybody else have it,'' he continued. "I think that's fundamentally unfair and perhaps illegal.''

The other alternative, Goddard said, would be to allow any signatures gathered for this election cycle to be held over and used to put the issue on the 2022 ballot. That, too, is currently illegal, with the law prohibiting signature gathering before the last election results have been announced.

Goddard said that lawmakers should be willing to consider either measure, "especially when you have a crisis like this and you're basically prohibited by circumstance from using person-to-person contacts.''

He said, though, the preferable choice would be to allow the same kind of electronic signatures on initiative petitions that are permitted for candidates.

"It makes sure that you have a registered voter signing,'' Goddard said. "It meets all the anti-fraud provisions.''