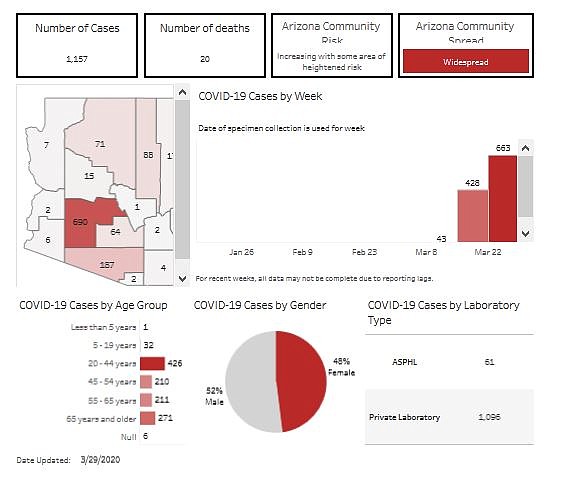 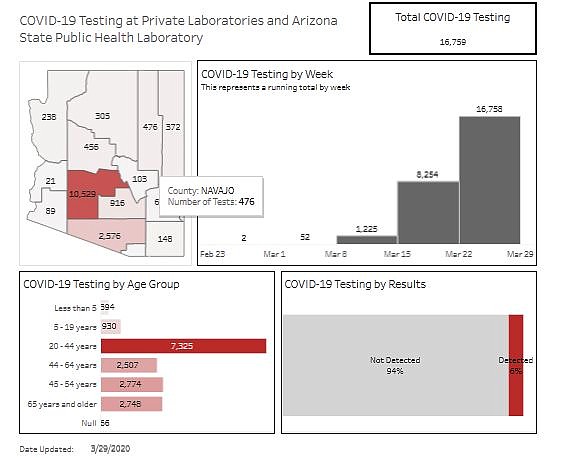 Arizona experienced its largest single-day increase in COVID-19 cases between Sunday and Monday with 238 new confirmed cases, bringing the state’s total to 1,157.

The previous largest single-day increase was 157 cases between March 26-27, according to the Arizona Department of Health Services.

ADHS has confirmed 1,113 new cases in Arizona since March 19. The state has categorized the caseload as “widespread” with cases reported in 14 of the state’s 15 counties.

ADHS reports that of the 16,759 tests done so far in Arizona, only 6% have resulted in positive tests.

Of the 1,157 cases in Arizona, the great majority are centered in Maricopa County, which reported 690 cases Monday morning, an increase of 145 cases in the past 24 hours.

There are now 187 cases in Pima County, with Navajo and Coconino counties having the next highest frequency, with 88 and 71 cases, respectively.

The Monday ADHS report also shows that the largest number of cases in Arizona is among those between the ages of 20 and 44 years old with 426 cases confirmed in that demographic. There are 210 confirmed cases for people between 45 and 54 years of age; 211 between 55 and 65; and 271 for those 65 and older. Fifty-two percent of the statewide cases are men and 48 percent are women.

Similarly, people between the ages of 20 and 44 have been tested more than any other age group in Arizona, with 7,325 tests done on those in the 20-44 demographic.

Of the 1,157 Arizona cases, 61 have been confirmed through the Arizona State Public Health Laboratory; 1,096 cases were confirmed by private laboratories.

If someone in your family has tested positive for COVID-19, keep the entire household at home and contact your medical provider.

Expiration dates on Arizona driver licenses have been delayed.

Statewide closures of Arizona schools has been extended through the balance of the current school year.

Do not travel while sick.

Cover your mouth and nose with a tissue or your sleeve (not your hands) when coughing or sneezing.

Wash hands often with soap and water for at least 20 seconds or using an alcohol-based hand sanitizer that contains at least 60% alcohol immediately after coughing, sneezing or blowing your nose.

If you need to seek medical care, before going to your doctor’s office, call ahead and tell them about your recent travel and your symptoms.

Discuss travel to China with your healthcare provider. Older adults and travelers with chronic medical conditions may be at risk for more severe disease.