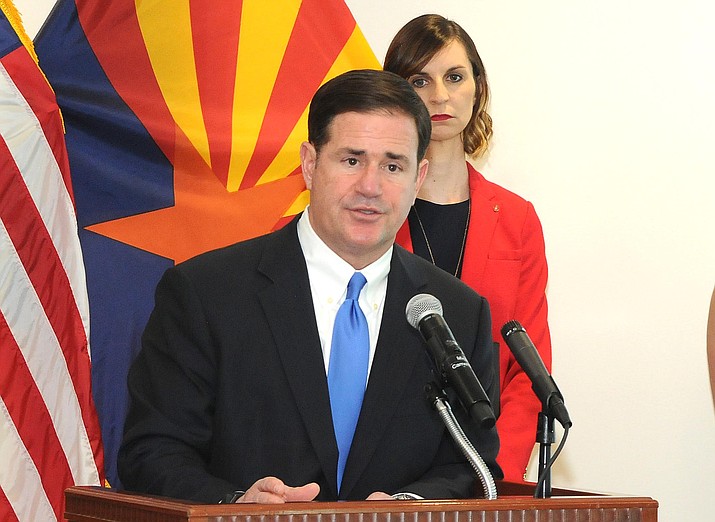 Backed by state schools chief Kathy Hoffman, Gov. Doug Ducey on Monday explains his "stay at home" order as well as their joint decision to keep schools shut through the end of the academic year. (Capitol Media Services photo by Howard Fischer)

PHOENIX⁠ —With infections and deaths increasing, Gov. Doug Ducey on Monday finally issued an order telling people who don't need to be out to stay at home.

The directive, effective at 5 p.m. Tuesday, says Arizonans must "limit their time'' away from their homes or property except to participate in "essential activities.'' That also includes obtaining what are essential services which can include everything from obtaining groceries and supplies and caring for family members and pets to going court and church -- or even to get hair or nails done.

And it specifically includes outdoor activities like golf and hiking "but only if appropriate physical distancing practices are used.''

Violators would be guilty of a Class 1 misdemeanor which can result in up to six months in jail.

Enforcement, however, could be another matter. That's because the governor's executive order says "no person shall be required to provide documentation or proof of their activities to justify their activities under this order.''

At a briefing Monday, the governor said he made his decision based on both the number of people infected and the rate of increase. But he also suggested that he may have had a bit of a blind spot to public perception.

"This was the first weekend I was actually able to be home for a little bit and I watched some of the national news,'' Ducey said. "And now I better understand the fear and anxiety that is gripping the nation and, of course, the state.''

In some ways Ducey is late to the realization.

Tucson Mayor Regina Romero on Friday implemented her own stay-at-home order, though she was careful to provide the same exceptions for essential services that the governor laid out in earlier orders. On Monday she urged Ducey to narrow his list of essential services to those she believes are "critical to maintaining public health, safety and community well-being.''

"We do not have the luxury of time to drag our feet on this,'' Romero said in a prepared statement. "Every hour we wait will cost us avoidable transmissions and critical medical resources.''

In Flagstaff, Mayor Coral Evans, defying Ducey, implemented her own proclamation which does not have the same exceptions for nail and hair salons as "essential.''

And the governor has been under pressure from outside sources, most recently including a letter from 100 members of the clergy through the Valley Interfaith Project to do more than he had done to date.

"Our faith traditions teach us that human life has a value far beyond markets and other considerations,'' they wrote.

"We also look to the medical science, which clearly states that early action is essential to stop the spread of COVID-19,'' the letter continues. "Both our faith and the science tell us that the time for equivocation is long past.''

Ducey, in announcing the move, said he has taken a "calm and steady approach, making data-driven decisions'' to protect public health and add hospital bed capacity. The governor said he's now ready to take that next step.

"The time for further action is now,'' he said.

Driving that, Ducey said, was a recommendation by state Health Director Cara Christ, who he said was looking at the latest Arizona data, to implement "enhanced physical distancing measures.''

Christ, in explaining that move, said there were several factors, including the latest figures showing 1,157 confirmed cases now encompassing all of the state's 15 counties. There also have been 20 deaths.

There's also the fact that respiratory cases now are close to 7 percent of all emergency room visits, up from just 2 percent. And the percentage of tests coming back positibve is now about 6 percent.

Ducey said that, in many ways, his directive is not a big change.

"Already, things have been shut down to a large degree,'' he said. "They're going to be shut down even further.''

But the governor also sought to put his own spin on what he is doing here, compared with orders issued by counterparts across the country. And some of it comes down to how it is described.

And he also sought to emphasize that while this is a stay-at-home order, there's a bit of "give'' in what that involves.

Specifically, he said, it directs people to "limit their time away from home except to conduct or participate in essential activities or essential services.''

"We do not want people to feel trapped or isolated in their homes,'' Ducey said.

"The weather is beautiful right now,'' he continued. "Find a way to get out and enjoy it -- with physical distancing.''

The governor also said he wants Arizonans to reach out -- at least electronically -- with those who probably cannot or should not go out.

"April can be a very difficult month on mentally fragile,'' he said.

"So let's use the technologies we have,'' Ducey continued. "Let's FaceTime people.''

He specifically mentioned his 96-year-old grandmother along with his mother and father-in-law.''

"We've been doing a lot of phone calls, a lot of FaceTiming,'' the governor said. He said the state needs to not only battle the virus but "not allow people to go stir-crazy.''

Christ separately reported that Arizona has now received 75 percent of the state's share of strategic national supplies of "personal protective equipment.'' That includes:

And Maj. Gen. Michael McGuire, the director of the state Department of Emergency and Military Affairs said that the Army is working to reopen eight of the nine floors of the closed St. Mary's Hospital in Phoenix, a move that Christ said should add 340 high-acuity intensive-care beds to the state's current capacity of about 1,500.