State school chief: No way to re-open schools effectively
State school board to meet Tuesday to discuss myriad of adjustments 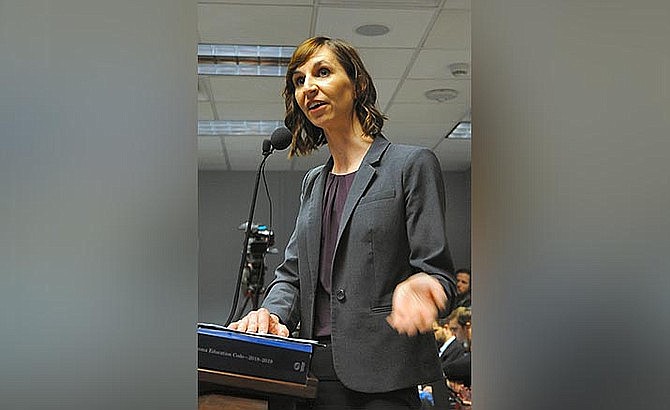 Kathy Hoffman, the state superintendent of public instruction, along with Gov. Doug Ducey, announced Monday there was no reasonable way to have schools reopen safely as scheduled on April 20, but she she conceded that this will not make up for actually having the state's 1.1 million public school students in classrooms. The state Board of Education will meet Tuesday to figure out exactly what happens next. (Capitol Media Services file photo by Howard Fischer)

PHOENIX - School is over for the rest of the year -- at least in the traditional sense.

Gov. Doug Ducey and Kathy Hoffman, the state superintendent of public instruction, announced Monday there was no reasonable way to have schools reopen safely as scheduled on April 20.

Hoffman said that schools are expected to be in compliance with plans approved earlier this month by state lawmakers to create distance learning opportunities. These can range from online teaching to even having school bus drivers drop off lessons.

But she conceded that this will not make up for actually having the state's 1.1 million public school students in classrooms.

Hoffman also said the state Board of Education will meet Tuesday to figure out exactly what happens next. That includes everything from the A through F grades given to schools to graduation and promotion requirements.

What it also will include, she said, is how students document what they have learned remotely.

Hoffman said, though, she is under no illusion that all students have the same chance of learning, citing in particular the shortage of laptop computers and even remote "hotspots'' -- devices to link computers to the intenet -- for students to be able to connect online.

In some ways, the decision to keep school doors shut is not a surprise. In fact, Rep. Michelle Udall, R-Mesa, crafted legislation in anticipation.

That measure suspends state laws that require there be a certain number of school days and instructional hours. It also canceled the annual statewide achievement tests.

Most significantly, it requires public schools to offer education services in "alternative formats'' to continue to receive the state aid. Schools then could continue paying employees to work from their homes or perform alternative assignments through the end of the school year.

At a press briefing Monday, Hoffman said some school districts are being creative.

And Hoffman said more than 545 schools throughout the state are preparing free breakfast and lunch that can be delivered.

"But there are major gaps in access to the technology that students and families need in order to continue the learning process online,'' she said.

"Many families simply do not have the resources, causing a high demand for devices including laptops and hotspots,'' the schools chief continued.

"It's much larger than I could have imagined,'' she said of the gaps in technology. "It's probably over 100,000 students, at a minimum, who don't have the technology at home.''

And fixing it with money isn't a simple solution.

"Laptops and hotspots are on back order because the entire country has been shifting to telecommuting,'' Hoffman said. And she said she has made pleas to Arizona business leaders as well as colleges and universities for extra laptops.

"So this is a very serious issue,'' she said. "This crisis will worsen many of the inequities that have long existed across our system and that have for years have widened the achievement gap between under-resourced communities and their more advantaged counterparts.''

She also said there also are separate issues of serving students with disabilities who, whether due to physical or cognitive impairments, cannot access online learning even if they had the equipment.

Hoffman said the immediate focus has been on working on online learning for the balance of this school year as well as the question of high school graduation, the issue the Board of Education will take up Tuesday. But she acknowledged there's also the issue of the academic credentials of students in other grades and whether they will be prepared to enter the next grade when schools reopen in August.

"We've been convening groups of superintendents and charter leaders to talk about that, to talk about what does this look like,'' she said.