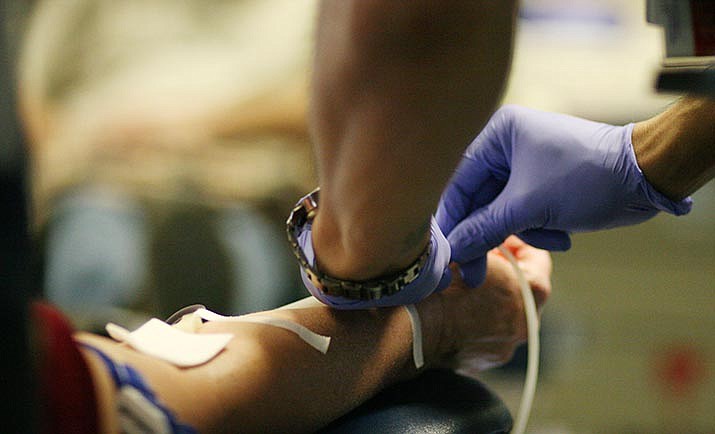 VERDE VALLEY — Whether by bloodmobile or in a permanent structure, Vitalant is scheduling as many blood drives as it can, said Sue Thew, public and media relations for Vitalant.

For the most up-to-date list of Vitalant’s blood drive schedule, or to make an appointment, visit vitalant.org.

According to Thew, blood donation “is an essential medical function.

“We cannot run the risk of creating a second national emergency by not allowing people to donate blood,” she said.

Both the U.S. Surgeon General and Federal Emergency Management Agency have stated that blood donation is “an essential function that cannot be disrupted,” according to Ralph Vassallo, chief medical and scientific officer for Vitalant.

Through early-May, Vitalant – formerly United Blood Services – has scheduled eight blood drives in the Verde Valley and Sedona. According to Thew, the coronavirus is not known to transmit through blood. But Vitalant staff are taking the temperature of donors before they are allowed to enter the donation location.

Because of the confined environment within the bloodmobile, Vitalant will limit the number of donor care technicians to two and reduce the number of donors allowed on the bus at one time, according to Sidney Lewis, Vitalant’s southwest division senior director of donor recruitment.

“Unfortunately, this will slow down the rate at which we can collect blood donations,” Lewis said. In fact, “stricter social distancing policies have caused a lot of blood drives to be canceled across the state,” Thew said.

Verde Valley locations to give blood

Give blood at the following locations through May 5. But visit Vitalant.org to make an appointment first, Thew said.

• Wednesday, April 8 from 11 a.m. until 3 p.m. in the bloodmobile at Sedona Spa & Fitness Club Community at the Los Abrigados Resort, 160 Portal Lane, Sedona;

• Thursday, April 16 from 10 a.m. until 3 p.m. at the Camp Verde Community Gym, corner of Main and Hollamon streets;

Visit Vitalant.org or call 877-258-4825 to schedule an appointment or for more information.