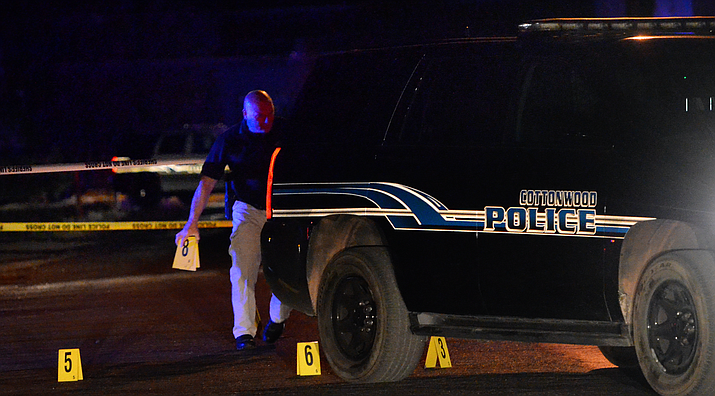 An officer examines a crime scene Wednesday evening near Birch and 15th streets in Cottonwood. A Cottonwood police officer suffered non-life threatening injuries and one person was taken into custody during a Wednesday evening altercation, according to a news release. VVN/Vyto Starinskas

COTTONWOOD - A Cottonwood police officer was wounded and one person was taken into custody during a Wednesday evening altercation, according to a news release.

At about 7:45 p.m. Wednesday, officers were called to the area of East Birch and South 15th streets for a call about a man who was "charging" vehicles passing by him.

Shortly after officers arrived on the scene, there was an exchange of gunfire. One officer was hit and sustained non-life threatening injuries.

The suspect was taken into custody a short time later without injury.

The Cottonwood officer who was shot was in stable condition as of late Wednesday evening.

The Department of Public Safety’s Major Crimes Unit is handling the investigation.

Police have not yet identified the man taken into custody, or the police officer who was shot.