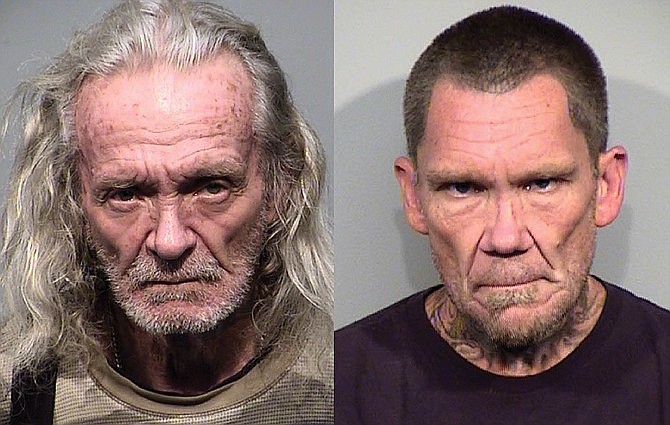 Pictured is Bruce Moore, 67, left, of Humboldt, and Dwight Elia, 49, of Dewey. Moore and Elia were wanted by the Yavapai County Sheriff’s Office after an attempted homicide Saturday, May 2, 2020, in Dewey-Humboldt. Moore was arrested in the afternoon Tuesday, May 4, and Elia was taken into custody later that evening. (YCSO/Courtesy) 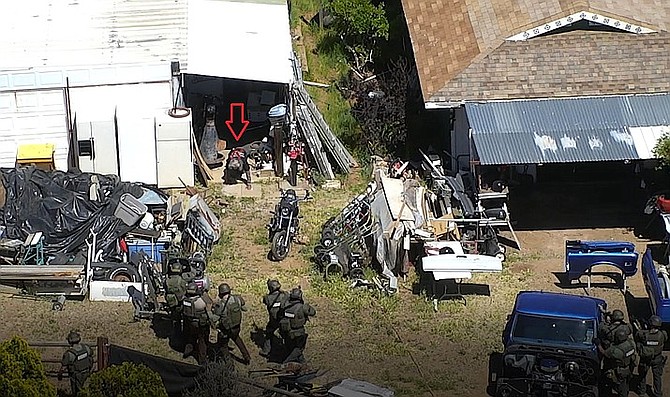 This photo shows Bruce Moore surrendering to SWAT on Tuesday, May 4, 2020, after he and 49-year-old Dwight Elia fired shots at a Dewey-Humboldt resident Saturday, May 2. (YCSO/Courtesy)

Both men were wanted for attempted homicide, among other charges, after they opened fire on a Dewey-Humboldt resident Saturday, May 2, following an altercation.

On Sunday, May 3, YCSO detectives sought and obtained no bond warrants for suspect’s Moore of Humboldt and Elia of Dewey. Detectives requested assistance from the U.S. Marshalls Office out of Flagstaff for investigative support and a joint operation in the search effort.

During this time, YCSO detectives developed leads on the possible whereabouts and both agencies worked together on the follow-up.

On Monday, May 4, YCSO deputies and U.S. Marshalls located Moore in an outbuilding on a property in the 6000 block of Storm Shadow Drive in Poland Junction, Arizona.

Moore refused to cooperate and exit the building. The area was contained and the YCSO SWAT team deployed along with a negotiator. Moore continued refusing to cooperate. A chemical irritant was introduced into the building and Moore eventually agreed to surrender and was taken into custody around 2:30 p.m.

Moore admitted shooting at the victim on May 2 following an earlier confrontation at another nearby location.

After firing a round, he saw the victim drop behind the SUV. Moore heard a second shot and thought it was the victim firing back, not realizing Elia fired a weapon. Moore refused to state where the firearm could be found.

Shortly after Moore’s arrest, detectives learned Elia had been dropped off at an apartment building in Spring Valley.

SWAT members, patrol units and U.S. Marshall personnel were able to find the apartment and located Elia hiding behind the headboard of a bed inside the apartment. He was taken into custody just before 6 p.m. Monday and refused to discuss the original incident.

Both were booked into the Camp Verde Detention Center on charges including attempted first degree murder, discharge of a firearm at a structure, aggravated assault, misconduct involving weapons, disorderly conduct and criminal trespassing.

Each is being held without bond.

After deputies responded to a shooting around 4:40 p.m. May 2 on the 13200 block of McCabe St. in Dewey-Humboldt, an investigation revealed that Moore and Elia fired shots at a man standing by his vehicle at the location following a confrontation.

Witnesses indicated Moore was using a handgun and Elia fired a ‘flare’ gun. The shots missed the victim with one round hitting the top of the SUV.

The victim was standing behind the SUV at the time and deputies noted the SUV likely prevented the victim from being struck by the round.

“There were several witnesses to the shooting who identified the suspects by name and some provide detailed descriptions,” YCSO spokesperson Dwight D’Evelyn said in a release May 3. “Residents were home at the time, including a child. The cause of the dispute is not clear at this time.”

The investigation revealed that suspect’s Moore and Elia left in a dark blue Chevy Tahoe driven by 41-year-old Serra Melton from Prescott Valley.

A follow-up search, based on information obtained at the scene, lead to Butte Street in Dewey-Humboldt where Melton was found in the Tahoe.

The suspects were not there. Melton admitted she drove the suspects to the McCabe street residence, knew they were armed, but denied knowing they were going to fire shots. Melton eventually acknowledged witnessing the shooting and driving the suspects out of the area.

She initially claimed dropping them off in Mayer, then changed her story stating the suspects were dropped off at separate locations in Prescott Valley.

Melton was booked into the Camp Verde Detention Center on charges including hinder prosecution in the first degree, and facilitation of discharging a firearm at a structure.