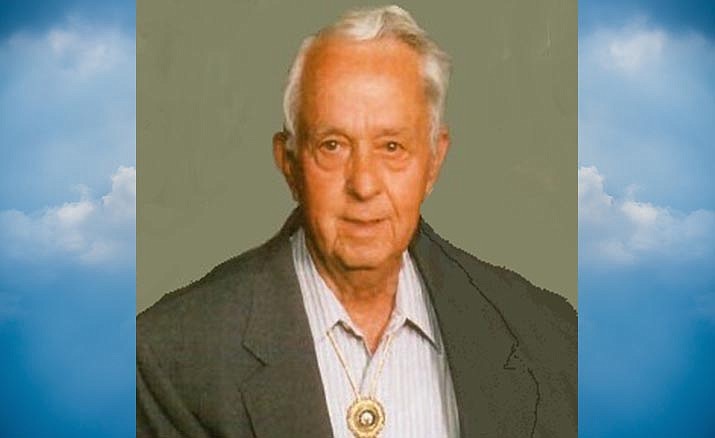 Preceded in death by his parents, Natalina and Virgil; his beloved son, Frank and his brothers and sisters, Ted, Fede, Virgil Jr (Nino), Mario, Mary, Henry, Alfred, Art, and Jim. Joseph was the youngest of 10 children.

Mr. Selna graduated from Jerome High School in 1940. He attended West Point before returning to Arizona to manage Selna Grocery in Clarkdale. Selna Grocery had additional locations in Jerome, Cottonwood and Humboldt.

The Selna Family was in the grocery business for 45 years.

In the mid-50’s, he partnered with Emil Mongini and they together built a real estate and investment business which is now managed by their families.

Mr. Selna was a lifelong member of the Catholic Church, while living in Jerome at Holy Family, and St Cecilia’s in Clarkdale. He was a member of the Knights of Columbus, Clarkdale-Jerome Elks Lodge and the American Legion.

He enjoyed listening to Big Band and popular music, but his favorite song was “Ave Maria.” He was a fan of Notre Dame and the Chargers. He followed the stock market from 14 years old until his passing.

Mr. Selna enjoyed traveling, especially to Mexico and Nevada. He was a dog lover from his first dog, Rudy to his last dog, Scotty.

He would often say “the luckiest day of my life is the day I married Ida.”

Then he would follow, the second luckiest day of my life is when Fr. Driscoll introduced him to his business partner, Emil Mongini.

He leaves his wife Ida of 71 years, and his children, Barbara Andre, Bernadette Selna, Raymond and his wife Pat (Bailey) Selna, numerous grandchildren and great-grandchildren, nieces and nephews.

An online obituary is available at www.westcottfuneralhome.com.