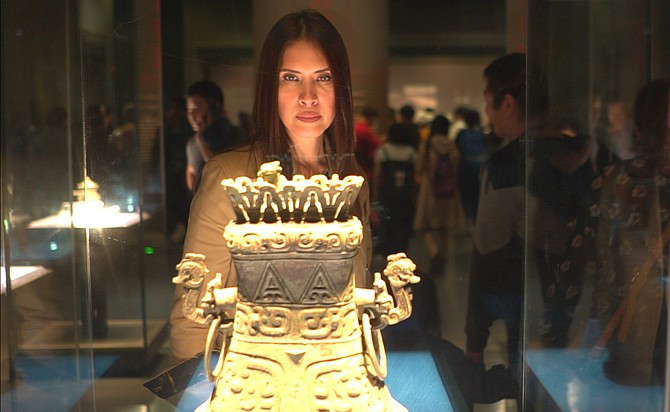 Bronze: A Forgotten Treasure – A quest to discover the story behind a forgotten trove of Chinese bronze artifacts

The Verde Valley Archaeology Center is a proud sponsor of the annual International Archaeology Film Festival, which opens its 17th annual edition on May 13, in an online environment, through May 17.

Organized by the Eugene, Oregon nonprofit, Archaeological Legacy Institute (ALI), The Archaeology Channel (TAC), usually holds an array of public activities, however, in keeping with social distancing advice, the Festival has moved to online streaming of the films selected for the competition, as well as the competition itself.

“When we launched The Archaeology Channel and began streaming videos in July 2000, our website became one of the first streaming-media platforms, and today it remains as one of the longest-running such sites and the only one in the world focusing on cultural heritage media,” says Festival Director and ALI Executive Director Rick Pettigrew.

“In keeping with our tradition and history of online media streaming, our response to the coronavirus pandemic is to enhance the streaming services we offer by building our own subscription video-on-demand (SVOD) streaming service, which we call Heritage Broadcasting Service, or just Heritage for short. The first task chosen for Heritage is to stream most of the films selected to compete for the International Archaeology Film Festival 2020 awards.”

The annual Archaeology Film Festival is much more than an exhibition of the world’s top cultural heritage films. It is designed to promote the development of cultural heritage media in the United States and worldwide.

The 17th Annual Festival Season accepted 103 film entries from twenty-six countries. Permissions for online screening was received for the 23 films selected for competition which were produced in Canada, France, Ghana, Iran, Italy, Mexico, Peru, Poland, Singapore, Turkey, and the USA.

The films in the 2020 competition cover a variety of fascinating topics from around the globe: places as far apart as Singapore and Peru and across the human timeline from hundreds of thousands of years ago in the Neanderthal era to the Japanese bombing of Oregon in World War II.

There are also films about the lifeway of the world’s last hunter-gatherers, an updated interpretation of Stonehenge, revelations about how the Egyptian pyramids were built, and the fascinating story of Polynesian sea voyagers as told by themselves.

Watching the Archaeology Film Festival 2020 films online will require a small virtual ticket fee ($5), which ALI will share with the filmmakers. The Festival award winners will be announced online on May 18, immediately after the close of the online screenings.

The Verde Valley Archaeology Center encourages all to stay at home and explore the wonders of human cultures past and present in the works of skilled media producers.

The Archaeology Channel’s International Film Festival affords the online viewer a chance to experience the world’s best cultural heritage films: visually rich, technically sophisticated works which are artistically produced and as entertaining as they are informative.

For a complete list of films, film trailers and other Festival information, as well as the link to get virtual tickets and view Festival films on Heritage, please visit us at: http://bit.ly/TACIFF.

The following is a list and brief description of the films in this year’s Festival competition:

• Bronze: A Forgotten Treasure – A quest to discover the story behind a forgotten trove of Chinese bronze artifacts

• Cedar: Tree of Life – For three Salish women, the sacred cedar tree is inextricably linked with their culture and life

• Lost Cities with Albert Lin: Stonehenge – Recent excavations may enhance our view of Stonehenge and its people

• Neandertal: The Mystery of the Bruniquel Cave – French researchers try to interpret a Neanderthal construction

• Remains: The Search for SFC Samuel J. Padgett – An attempt to recover a soldier’s body from Vietnam jungles

• The Ring People – Shell rings litter the South Carolina coast, remnants of a society that scientists hope to understand

• River of Treasures – Researchers trace the lost treasures of Warsaw through history, chasing the thrill of rediscovery

• Stout Hearted: George Stout and the Guardians of Art – A high-stakes race to protect art from Nazi hands

• Their Story – Re-evaluating the attitude about gender in human history, the focus shifts to the other half of the story

• We, the Voyages: Our Vaka - Pacific voyagers tell their story through the recreation of their ancestral sailing Yam Festival,

• Ghana - A closer look at the music, dancing, feasting, and local crafts of the “Te Za” Yam Festival

The Verde Valley Archaeology Center is a nonprofit educational organization with a museum and collection repository in Camp Verde.

The Verde Valley Archaeology Field Institute is the educational division of the VVAC and is the official nonprofit partner of the National Park Service for Montezuma Castle and Tuzigoot national monuments.