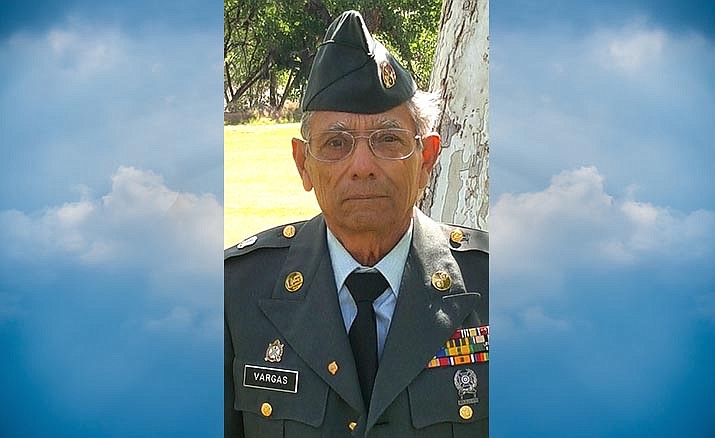 Angel Alvarez Vargas, age 86, of Cottonwood, Arizona was called home by his “ladybug” Juanita Vargas to join her in eternal peace, on May 10th 2020.

He is preceded in death by his wife, Juanita; his son, David Vargas; his mother, Guadalupe Aguilar and four siblings.

Angel was born in Rancho Cucamonga, California and raised on the Alvarez Ranch, his family homestead in Sycamore Canyon.

He was drafted in 1952 during the Korean War, yet served all of his time in the U.S. packing bombs, ammunition, and supplies to be shipped to the war zone.

He felt pride knowing that he did his part to support those abroad. He was honored to serve his country. Angel served over 40 years between the Army, the National Guard and as a civilian worker for the military, including being a part of a classified “secret” unit.

Most of Angel’s years in the military were spent at the Navajo Army Depot in Bellemont, Arizona, near Flagstaff. In 2018 he had the privilege of going on the “Honor Flight” to Washington D.C. with other veterans of the Korean War.

Angel married Juanita, the love of his life, as a young man and stayed by her side until her passing in 2016. Angel believed in giving back to his community.

He taught baseball and softball to many in Flagstaff. One of his greatest joys was being an NRA instructor for over 30 years in Flagstaff and the Verde Valley.

Throughout his later years he would often be seen in Jerome, where he grew up, talking to the locals and tourists. He loved sharing his knowledge of the Verde Valley with anyone who would lend an ear.

He also loved to tell everyone about his career as an ordinance disposal expert and instructor and how he would destroy 500-pound bombs.

Angel was an avid hunter and fisherman who loved spending as much time as he could in the great outdoors. He was familiar with every inch of the wilderness in Northern Arizona and passed his love of nature on to the younger generations of the family.

The greatest accomplishment of Angel’s life was his family. Family was always Angel’s #1 priority. He was always there to support his wife, children and grandchildren with whatever obstacles they encountered in their lives. He was there to celebrate all of his family’s accomplishments – celebrating with pride and endless love. He especially loved his “changos” (his term of endearment for his grandchildren). He was always one to share his life experiences with his family, to ensure their happiness and success. Angel’s family will now pick up where he left off.

Mass will be held on Tuesday, May 19th at 10 a.m. at the Immaculate Conception Catholic Church, 700 Bill Gray Road, in Cottonwood.