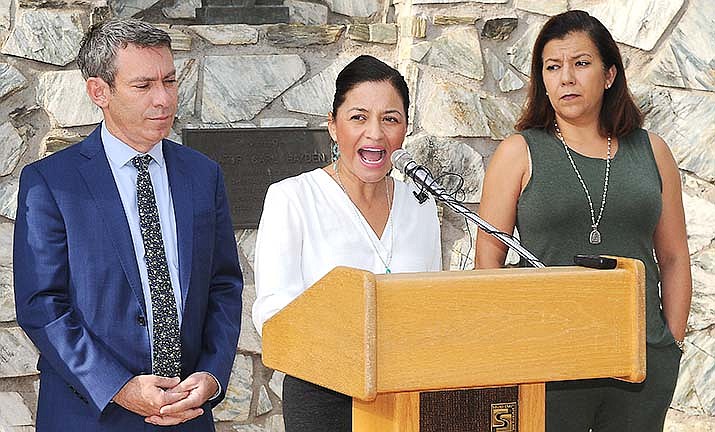 Rep. Aaron Lieberman, D-Phoenix, left, said a bill approved by the House this week amounts to having to prove willful misconduct. If the Senate and the governor approve HB 2912, COVID-19 victims or their survivors could sue only if they could show someone was grossly negligent. File photo

HB 2912 would immunize defendants against lawsuits if their actions or inactions that resulted in someone contracting the virus were merely negligent. Instead, victims or their survivors could sue only if they could show someone was grossly negligent, a standard that Rep. Aaron Lieberman, D-Phoenix, said amounts to willful misconduct.

Tim Fleming, the House attorney, advised lawmakers that it could run afoul of a constitutional provision that prohibits lawmakers from limiting the rights of victims to sue for damages.

Senate President Karen Fann told Capitol Media Services that no decision has been made whether senators, who have never considered the issues in HB 2913, are willing to come back to vote on it.

There's also the question of whether Ducey will sign the measure.

He dodged questions earlier this week about both whether he thinks businesses need new liability protections and whether he will approve a measure that limits the penalties that can be imposed for violating his executive orders.

"There's a great cloud of fear that hangs over the business community about being sued,'' he said.

"It's slowing down their efforts to go back and open, to get their employees back, to get everybody working, get tax revenue back in to fund programs,'' Kavanagh said. "And this will go a long way to alleviating that fear.''

He said the bill will do more than prevent lawsuits.

"We're trying to prevent extortion by unscrupulous lawyers,'' Kavanagh said, filing claims "not to go to court but with the express intent of basically extracting settlements of $3,000, $4,000, which is about half of what the business would have needed to defend the lawsuit.''

Kavanagh wasn't the only one seeking to capitalize on the animosity of some toward attorneys as a reason to support the liability limits.

"I support lawsuits,'' Rep. Anthony Kern, R-Glendale, said during a hearing on the measure earlier in the day. But he said businesses need protections against threats designed to get them to settle out of court.

"And they need to know when they open their doors that there are not going to be these trial attorneys out there lining their pockets and going door to door and filing these, in my opinion, frivolous lawsuits,'' Kern said.

But Rep. Domingo DeGrazia, D-Tucson, said it would be one thing for lawmakers to say that businesses that follow specific guidance from the Centers for Disease Control or the Occupational Safety and Health Administration would gain some liability protection. HB 2912, he said, does not do that.

And he asked colleagues if that's the message they're trying to send.

"Do you want to look at your constituents and say, 'Yeah, it's OK for businesses to be negligent about COVID-19' ?" DeGrazia said.

Rep. Athena Salman, D-Tempe, said there are risks to people.

"If a customer eats at a restaurant that does not take sanitary precautions and they get the virus, it would be almost impossible to prove that the restaurant is liable, and that customer would have no recourse,'' she said. Ditto, Salman said, situations where a nursing home is not following safety procedures and a resident contracts COVID-19.

"This absolutely allows redress,'' he said. "It just has a different standard.''

Some of the votes for the measure were based on another, semi-related provision that Kavanagh inserted. It would reduce the penalty for violating any emergency order issued by the governor from the current misdemeanor -- with a potential six-month jail term and $2,500 fine -- to just a $100 civil penalty. And offenders even could escape that by curing the violation before going to court.

It also would eliminate the possibility that a business that ignored an executive order could lose its license.

Gov. Doug Ducey used the threat of both the criminal penalty and loss of license to try to get compliance with the executive orders he issued in March shuttering certain kinds of businesses. That bothered Rep. John Fillmore, R-Apache Junction.

"When the government can say that you have to close up shop or they will take your license for trying to feed your family, for trying to provide for your workers, your employees and the people that you have known for many years, then there's something wrong, radically, drastically wrong,'' he said.

And Rep. Walt Blackman, R-Snowflake, objected to rural businesses being dictated to "from the big state of Maricopa.

"Please don't tell us how to live our lives,'' he said.

Despite the House approval, the future of the measure is unclear.

State senators earlier this month approved a resolution saying they were finished with their business for this session and were ready to go home. But since they cannot do that without House approval the Senate technically remains in recess.