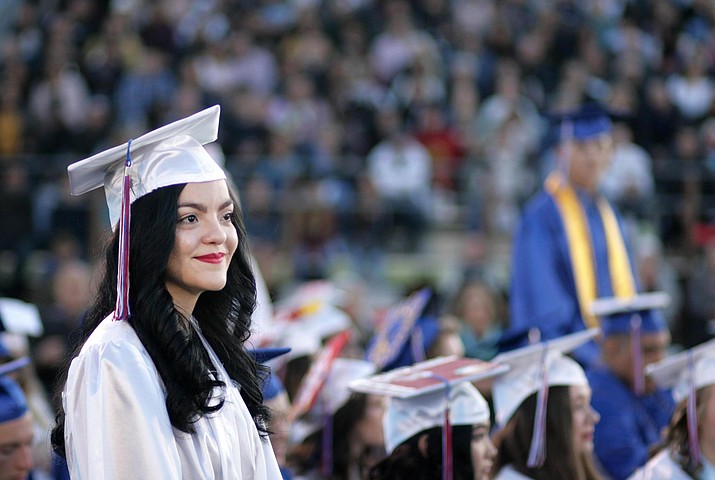 Camp Verde Unified School District will observe social distancing at graduation/promotion ceremonies June 2-4. The district is also “strongly discouraging anyone who has been sick, exposed to sick people, or experiencing symptoms of sickness from attending our ceremonies.” VVN/Bill Helm

However, the graduation and promotion ceremonies are optional, the district stated in an email Tuesday to the Verde Independent. “Graduates that don’t attend may pick up their diplomas at the office.”

First and foremost on the precautions list, the district is “strongly discouraging anyone who has been sick, exposed to sick people, or experiencing symptoms of sickness from attending our ceremonies.”

Graduates will be social distanced at six feet apart, and there will be no receiving line following the ceremonies.

Each graduate will be temperature scanned at practice. Any student who has a temperature over 100.3 degrees will not be allowed to participate, per Centers for Disease Control and Prevention guidelines – CDC.

At practice, graduates will receive tickets for their immediate family up to 10, as well as a waiver that must be returned before they participate in the ceremony.

The waiver, the district said, must also “list attendees of the graduate.”

Attendees are asked to respect social distance guidelines set forth by the CDC. The district will have the football field marked “to assist with social distancing.”

“All space on the field, track and bleachers will be utilized to allow families to social distance from others,” the district stated. “You may bring lawn chairs to sit on the field and track, but please respect the space of other families.”

At the June 2 graduation, South Verde attendees will be asked to social distance in the auditorium.

Although Camp Verde Unified welcomes “anyone who chooses to wear masks or any other personal protection equipment,” the district does “not plan to require staff to do so.”

“All staff will be considerate by following contact-free protocol,” the district stated. “We also ask that each attendee respect the wishes of those who are contact-free.”

Camp Verde Unified is also “strongly encouraging vulnerable people, those with underlying health conditions, or anyone who does not feel comfortable around a large group to join the live stream ceremonies on Facebook or the Verde Independent.”