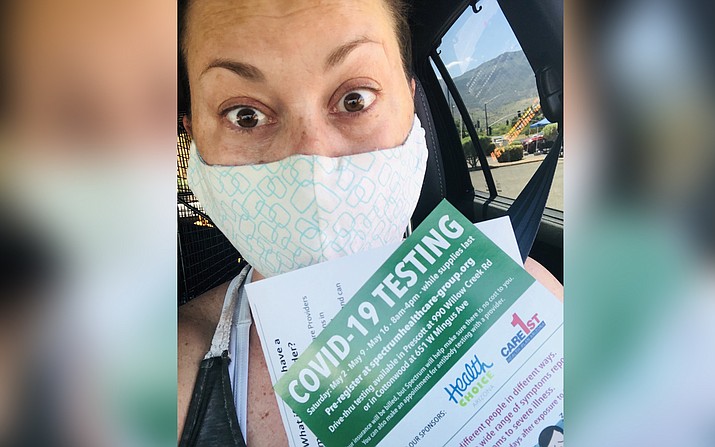 COTTONWOOD — Sebrina Mertz Shaw’s body thinks it has chicken pox – but it doesn’t.

Shaw, a 42-year-old attorney who lives in Cottonwood, has COVID-19.

Tested on May 16 at one of the Spectrum blitz testing days, Shaw got word three days later she was positive. At the time she was asymptomatic positive, meaning positive yet showing no signs.

Of the COVID-19 patients interviewed so far by Yavapai County Community Health Services, only 18 have been asymptomatic, said Stephen Everett, section manager of communicable diseases.

Since asymptotic cases are “not experiencing any negative health effects, they would not need to be hospitalized,” said Karlee Weiler, marketing specialist at Northern Arizona Healthcare.

As of May 28, Shaw has lost her sense of smell.

“I thought it was fading some yesterday,” Shaw said Thursday morning. “But it’s now something I feel confident to share.”

Losing the sense of smell is the only COVID-19 symptom Shaw has experienced.

Testing was available – for free

On May 20, and again on May 21, Shaw woke with a “slightly scratchy throat and minor sinus congestion.”

Had she not tested positive, Shaw would have considered the symptoms allergy-related because they “cleared up each of those days within a few hours, and without medication.” She’s not had those symptoms since.

Overall, Shaw does not feel any differently than when she found out she had the coronavirus. Shaw didn’t get tested because she felt sick, she said. The testing was available, for free, and she “thought it was important to be a part of the effort to capture this virus and how prevalent it was, or wasn’t, in our community,” she stated in a recent social media posting.

As a criminal defense attorney, late-March or early-April is the last time Shaw was at the Yavapai County Jail. Late-April, the last time she was in court.

Not prepared for this

At age 8, she told her parents she would one day be a lawyer.

“I know often my clients are at the worst point in their lives, and I am perhaps the only person left in their lives to care,” Shaw said. “It is my job to tell the story of who they are, and why they are still valuable in our society.”

It’s not just in her professional life that Shaw feels empathy.

“I spend a great deal of my heart and my life in an effort to help others,” she said. “To now find myself recalling each and every person I had come into contact with was like being repeatedly hit in the gut. A continuous shaking of my head. I think I did that for nearly two hours straight. How did I end up compromising those I care for ... exposing them without knowing?”

Following her May 16 test, Shaw said she “lived, a little.”

“I saw my packed town full of tourists from all over, filling our streets, stores and restaurants,” she said. “I watched nearly every single patron unmasked, and social distancing wasn’t so important.”

Shaw is not sure whether she next became complacent, or comfortable, as she was “finding common ground around me, seemingly encouraging a limited visit with a few different friends and family members here and there over the last several days.”

After the test – but before being told she was positive – Shaw ate lunch out, instead of ordering to go or eating at home. She was out in nature when she received “the call.”

“It was not news I was emotionally prepared for,” she said.

Before she lost her sense of smell, Shaw’s most significant symptom since the COVID-19 positive diagnosis started on May 23, the eighth day. The urge to scratch – a lot.

“I began to itch from my elbows to my wrists and noticed I had some red bumps on my forearms,” she said. “On Sunday – day 9 with COVID-19 – around midday my legs, from my calves down to my ankles, started to have the same itchiness and red bumps appearing.”

Shaw spoke with two of her doctors, and reviewed information online about recent studies.

“It seems as though my immune system is reacting to the virus with a chicken pox-like reaction,” she said. “I may continue to develop symptoms throughout this week, but hopefully not.”

As of May 28, the itching is getting better, Shaw said.

“Today, I don’t itch at all,” she said Thursday.

Since her positive diagnosis, Shaw has been “extremely public” in an effort to raise awareness about asymptomatic COVID-19 patients “and the importance of participating in community blitz testing.”

“I have had a tremendous amount of support from family, friends and through social media,” she said. “I have been able to keep in touch with my loved ones by phone and Facetime. It has been amazing to see the public response as my story and related updates have gone viral on Facebook. I have had contact with literally hundreds of people online who have shared in my journey and expressed interest in my diagnosis and experience.”

Although confirmatory testing is not required for COVID-19, Shaw got word Thursday evening that her May 23 test results were negative. Shaw plans to test again on May 30, as she looks forward to a second negative test.

Making something positive out of this experience

Shaw has also reached out to dozens of friends who she was in contact with leading up to her diagnosis. She said knowing that any of them could have been infected, which has been “devastating and heavy on my heart, and remains so until I know that no one else tests positive that had contact with me.”

Shaw has put together a list of 34 people who “may have been exposed by me in the two weeks prior to my positive test, as well as in the three days before I received my test results.”

So far, she said seven have told her they tested negative, including her husband.

Once Shaw tests negative twice, she’ll find out whether she has made any antibodies and will “try to donate my blood from my difficult-to-draw-from veins.” Why? “Because I’ll be damned if I can’t somehow make something positive out of my experience.”

Shaw is writing about her experiences with COVID-19 on her Facebook page.