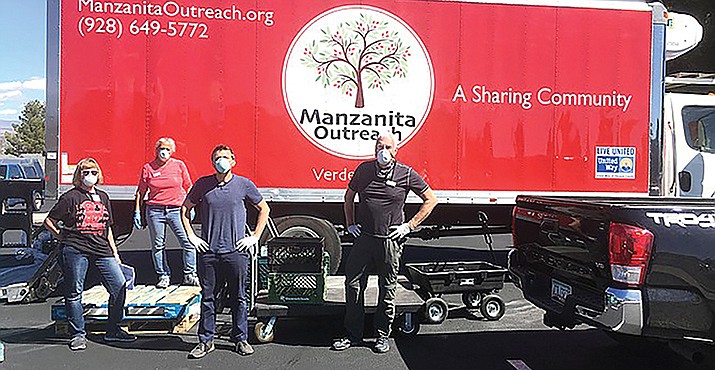 In addition to local food distribution, staff and volunteers from Manzanita Outreach team up to provide wellness checks on seniors and for deliveries to centers in far-flung Yavapai County communities, such as Skull Valley, Cordes Lakes and Mayer.

VERDE VALLEY — The beeping sound of a large van or truck backing up can be music to the ears of employees and volunteers at a food pantry or a related nonprofit.

However, this spring, the real music has sounded much more varied, as it’s the sound of folks pulling up in regular vehicles, dropping off the generous amounts of donations that have kept Verde Valley residents fed during the COVID-19 pandemic.

Volunteers have been a critical part of that process — taking the risks of contracting an illness and enduring the elements and, in many cases, dealing directly with donators or beneficiaries.

Kellie Wilson, director of the Old Town Mission said most of her volunteers stopped coming to either the mission or the thrift store, as they are elderly and in the highest-risk COVID-19 age group. She has about four volunteers, who are at least slightly younger, and who have stuck with the mission throughout the pandemic. “We couldn’t do what we do without them,” Wilson said. “We’re grateful for the staff that came down here when the thrift store closed and also for the five part-time people we hired, but the volunteers are really needed, too.”

Wilson said not having people inside, shopping for food, but rather picking up pre-packaged food at curbside, required fewer helpers, but it also means the team needs to move fast to assemble packages.

Wilson said her four “steadfast” volunteers are two receptionists, one involved with handling food for families and Jim “Irish” Tigue, a former chef who volunteers his time and talents in the kitchen. 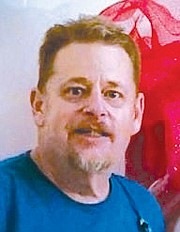 Jim "Irish" Tigue has been the volunteer cook in at the Old Town Mission, coming in an extra day of the week during the COVID-19 pandemic.

“Irish is amazing,” she said. “He not only has started coming in on his day off to cook for the Homeless Resource Center, but he can invent and innovate all sorts of dishes and processes. He turned some government orange juice and ordinary chicken into a delicious orange chicken entree.”

Wilson said before the pandemic, volunteers helped prepare between 150 and 300 food boxes per week for families.

That has increased dramatically, and for the final week of May, she said the total for the week will be between 550 and 600 boxes.

The mission plans to return to having clients come into the mission and pick out their own food, starting July 6.

There is collaboration Verde Valley organizations that help feed the needy, including sharing extra food and communicating to ensure, one group isn’t, as Wilson says, “handing out 20 cans of tomatoes to everyone, and nothing else.”

For example, this past week, Wilson said, a Manzanita Outreach truck broke down, and Old Town Mission loaned Manzanita its refrigerator truck.

“We typically have more than 100 people volunteer, at some point during each month,” Newcomb said. “Our food is packed up by paid staff, but the loading and distribution and registration is all done using volunteers.”

Due largely to grants from the Arizona Community Foundation of Sedona and the United Way, Newcomb was able to hire more paid staff.

After a process of changing best practices, some of that Manzanita volunteer force has increased in number.

The nonprofit’s only interaction with the public at its facility is for its Saturday parking-lot pickups.

“We were up to about 800 cars each Saturday, and have leveled back down to about 600,” Newcomb said.

Manzanita also uses volunteers for wellness checks on seniors and for deliveries to centers in far-flung Yavapai County communities, such as Skull Valley, Cordes Lakes and Mayer. They rely on local volunteers to distribute those packages to people in need in those communities.

Wilson and Newcomb both said they’re grateful for the work done by other Cottonwood-area nonprofits, such as Project Rising Hope or the New Hope Christian Fellowship. They both said being available for pickups at different days and times of the week helps serve Cottonwood.

They also work with Bread of Life Mission of Camp Verde and accept extra food through an arrangement with Sedona Food Bank Director Cathleen Healy-Baiza.

Cottonwood has more government-service facilities than other Verde Valley communities and attracts different clientele to town.

“We do gap analysis, find out where the gaps are, and fill those,” Newcomb said.

Jeremy Embry is the CEO of Bread of Life Mission of Camp Verde. He said his organization, too, is grateful for the grant support of the Arizona Community Foundation.

Several Verde Valley nonprofits pay for shipments from St. Mary’s Food Bank of Phoenix. Embry said it takes four separate crews — a morning food prep and assembly group, the truck and vehicle distribution group, the cleaning/sanitizing group and the registration group — and about 30 people to allow Bread of Life to serve people in the Camp Verde area.

“We couldn’t do this without volunteers,” Embry said. “We’ve changed and improved protocol, talking to other facilities about best practices. And if any volunteer doesn’t feel safe going out or being in any environment, we totally respect that.”

Embry points out that certain practices are likely never coming back, such as a “farmer’s market” food pantry model of having clients pick through fruits or vegetables to find the produce they like.

However, there are compromises that can be made, such as having people choose from among a wide selection of pre-wrapped packages of food. He also noticed new phenomenona, such as trading for popular items or foods one area resident knows how to prepare, while another doesn’t.

“You can see the looks on their faces, both when they get something they don’t know what to do with, versus how they look when they can trade for something their family likes,” Embry said. “We know people tend to waste very little of foods they like.”

Embry said volunteers at Bread of Life have shown him what people will do for their neighbors.

“These Arizonans have literally given their blood, sweat and tears so that their neighbors could have food,” he said.