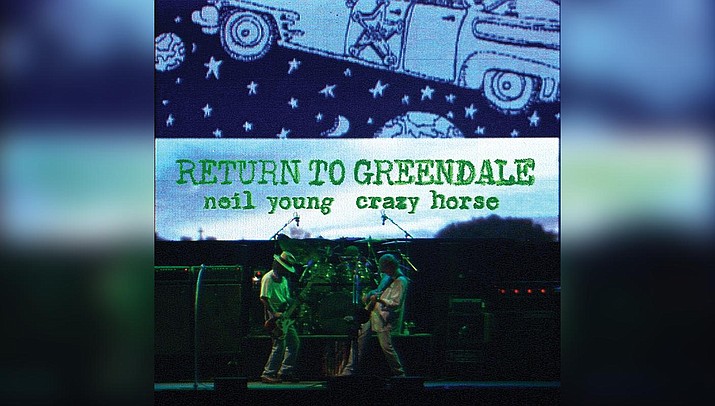 Return to Greendale is the next installment in Neil Young’s Performance Series (#16) and features a concert from the historic and unique 2003 tour supporting the release of the Neil Young with Crazy Horse album Greendale.

On the 2003 tour, Neil Young and Crazy Horse were joined on stage by a large cast of singers and actors to perform the story Neil Young wrote about the small town of Greendale and how a dramatic event affects the people living there. The 10 songs from the powerful original album are performed in sequence, with the cast speaking the sung words - adding to the intensity of the performance.

The film of the ambitious live show captures the vibrancy of Neil Young and Crazy Horse on stage in a unique multi-media experience. It seamlessly blends together the live performance, the actors portraying each song, with the story occasionally enhanced by scenes from the Greendale-The Movie.

Tracks include: Falling from Above, Devil’s Sidewalk, Bringin’ Down Dinner.

“The Deconstruction” was followed by an extensive tour in 2018 and the band members were eager to record and release a new album to perform live again, with plans to start in January 2021 that were disrupted due to the COVID-19 pandemic.

Releasing the album without the ability to promote it was done to add some comfort to their fans who are on lockdown.

The album was preceded by the single “Baby Let’s Make It Real”/”Who You Say You Are”, announced on Sept. 1.

When Earth to Dora was announced on Sept. 16, Eels made “Are We Alright Again” available as a single.

Eels was formed in Los Angeles, California in 1995.

Band members have changed across the years, both in the studio and on stage, making Everett the only official member for most of the band’s work.

Eels’ music is often filled with themes about family, death, and lost love.

Tracks include: Anything for Boo, Are We Alright Again, Who You Say You Are.

Sam Smith continues their all-conquering journey to super stardom as they move towards the release of third album, “Love Goes.”

Following global smashes like Dancing with a Stranger with Normani (2.5 billion streams) and How Do You Sleep?, Smith has sold over 28 million albums, with 7 UK No. 1 records to date including Writing’s On The Wall, the 1st Bond theme to hit #1, gaining a Guinness World Record.

In addition, Sam has also received 4 GRAMMYs, 3 BRITs, an Academy Award and a Golden Globe.

Love Goes is the upcoming third studio album by Smith. The album was originally titled To Die For and was due for release in June 2020 but was delayed due to the COVID-19 pandemic.

Smith also felt it was insensitive to use the word “die,” due to what many people were going through.

Before its pushback, Smith had released a number of singles in promotion of the album.

Tracks include: Young, Diamonds, Another One, My Oasis, So Serious, For the Lover That I Lost, Dance (‘Til You Love Someone Else), Breaking Hearts, Forgive Myself, Love Goes, Kids Again.

The first release, “Grew Apart,” is a looser, funkier number that depicts someone struggling to hide his real feelings about a breakup, while the more recent “Clean Slate” describes the sensation of falling in love and wishing the past could be wiped away.

Woods worked with a diverse group of collaborators on Without People, including Katie Pruitt (who sings on “She Waits for Me to Come Back Down”), Tucker Beathard, Tom Douglas, and Ashley Monroe.

Woods also launched the Donovan Woods With People Project to support creators in marginalized communities from North America, the U.K., Sweden and Kenya. Woods will work with the creators to come up with an interpretation of each song on With People.

Tracks include: Without People, The Last Time I Saw You, Seeing Other People, We Used To, She Waits For Me To Come Back Down, Clean Slate.

Disco is the upcoming 15th studio album by Kylie Minogue.

A departure from her previous country-influenced album Golden, it includes influences of 1970s and 1980s disco, as well as modern-day club music.

“Say Something” was released as the lead single from the album. It premiered on July 23 on BBC Radio 2, during the The Zoe Ball Breakfast Show.

It peaked at number 82 on the UK Singles Chart.

It also reached number nine on the UK Singles Downloads and Sales charts.

The music video for the song was directed by Sophie Muller and filmed at the Black Island Studios in London, England while adhering to social distancing measures due to the COVID-19 pandemic.

It depicts the singer travelling through the universe mounted upon a golden horse sculpture, shooting lasers from her hands and flying on a hovercraft.