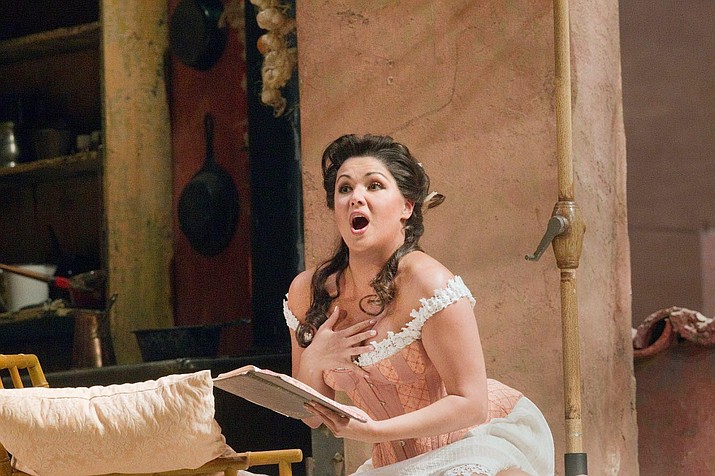 The Sedona International Film Festival will present the encore of the Met Opera production of Donizetti’s “Don Pasquale” (from the 2010 season) on Saturday, Nov. 14 at 10 a.m. at the Mary D. Fisher Theatre.

The Sedona International Film Festival will present the encore of the Met Opera production of Donizetti’s “Don Pasquale” (from the 2010 season) on Saturday, Nov. 14 at 10 a.m. at the Mary D. Fisher Theatre.

There will be a pre-opera talk at 9 a.m. led by John Steinbrunner.

Donizetti’s timeless comedy shines in Otto Schenk’s enchanting production, conducted by James Levine and featuring a remarkable cast. The incomparable Anna Netrebko is Norina, the young widow beloved by Ernesto (a suave Matthew Polenzani), who is about to be disinherited by his miserly uncle, Don Pasquale (John Del Carlo). It takes the clever scheming of Dr. Malatesta (Mariusz Kwiecien) to set things right and to teach the old curmudgeon a lesson — fits of temper, mistaken identities, and all kinds of comic confusion included.

Rome, mid-19th century. The old bachelor Don Pasquale plans to marry in order to punish his rebellious nephew, Ernesto, who is in love with the young widow Norina. Pasquale wants an heir so he can cut the young man off without a penny. He consults Dr. Malatesta, who suggests as a bride his own beautiful younger sister. Feeling rejuvenated, the delighted Pasquale asks Malatesta to arrange a meeting at once. Ernesto arrives and again refuses to marry a woman of his uncle’s choice. Pasquale tells him that he will have to leave the house, then announces his own marriage plans to his astonished nephew. With no inheritance, Ernesto sees his dreams evaporating. To make matters worse, he learns that his friend Malatesta has arranged Pasquale’s marriage.

On her terrace, Norina laughs over a silly romantic story she’s reading. She is certain of her own ability to charm a man. Malatesta arrives. He is in fact plotting on her and Ernesto’s behalf and explains his plan: Norina is to impersonate his (nonexistent) sister, marry Pasquale in a mock ceremony, and drive him to such desperation that he will be at their mercy. Norina is eager to play the role if it will help her and Ernesto to be together.

Ernesto, who knows nothing of Malatesta’s scheme, is desperate about the apparent loss of Norina and imagines his future as an exile. Pasquale, on the other hand, is impatient to meet his bride-to-be and enchanted when Malatesta introduces the timid “Sofronia.” Pasquale decides to get married at once. During the wedding ceremony, Ernesto bursts in and accuses Norina of being unfaithful. Malatesta quickly and quietly explains to him what is going on and Ernesto plays witness to the wedding contract. As soon as the document is sealed and Pasquale has signed over his fortune to his bride, Norina changes her act from demure girl to willful shrew. The shocked Pasquale protests, to the delight of Norina, Ernesto, and Malatesta.

Pasquale’s new “wife” has continued her extravagant ways and amassed a stack of bills. When servants arrive carrying more purchases, Pasquale furiously resolves to assert his rights as husband. Norina, dressed elegantly for the theater, slap him when he tries to bar her way. He threatens her with divorce, and she realizes she feels sympathy for the old man’s pain.

As she leaves, she drops a letter implying that she has a rendezvous with an unknown suitor in the garden that night. The desperate Pasquale sends for Malatesta. Malatesta first tells Ernesto to make sure that Pasquale will not recognize him when he plays his part in the garden that evening.

Then, alone with Pasquale, Malatesta assures him they will trap “Sofronia” in a compromising situation. Pasquale is happy to leave everything to Malatesta.

In the garden, Ernesto serenades Norina, and the two declare their love. Pasquale and Malatesta arrive—too late to catch the young man, who slips into the house, while “Sofronia” plays the innocent wife. Malatesta then announces that Ernesto is about to introduce his own bride, Norina, into the house. “Sofronia” protests she will never share the roof with another woman and threatens to leave. Pasquale is overjoyed and grants permission for Ernesto to marry Norina, with his inheritance. When Sofronia’s identity is finally revealed, Pasquale accepts the situation with good humor, gives the couple his blessing, and joins in observing that marriage is not for an old man.

“Don Pasquale” from the Metropolitan Opera will be shown at the Mary D. Fisher Theatre on Saturday, Nov. 14 at 10:00 a.m. with a pre-opera talk by John Steinbrunner starting at 9 a.m.

For more information and to order tickets online, visit SedonaFilmFestival.org.