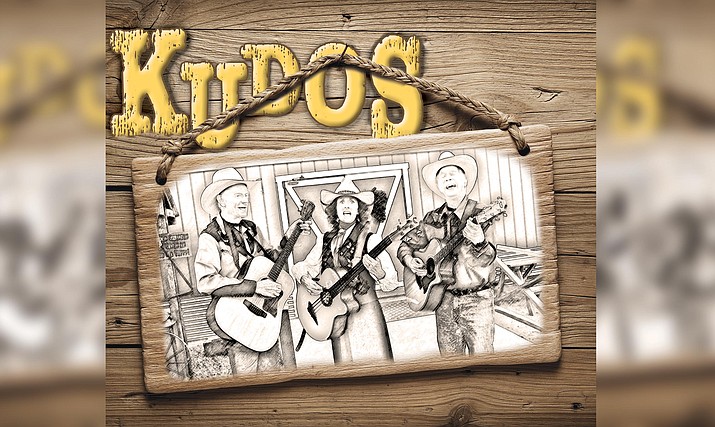 In 2018, The Blazin’ M Cowboys Band, as well as individual members of the Cowboys, harmony and yodeling champions Jim & Jeanne Martin, and emcee, vocalist and steel-guitar player, Bill Bassett, were inducted into the Greater AZ Country Western Swing Association Hall of Fame.

If you love live music, you will want to check out the musical menu at Sound Bites Grill in Uptown Sedona this week. The award-winning venue brings in live music four to five nights a week in their show room.

The week of live music will culminate Sunday, Nov. 15, 6-8 p.m., with a rare and special performance by The Blazin’ M Cowboys (from the Blazin’ M Ranch) for one last time as they take the stage in the Sound Bites Grill Celebrity Showroom.

Wednesday, Nov. 11, local guitarist/ukulele virtuoso Patrick Ki will perform from 5-8 p.m. Patrick has been performing in Sedona for over 20 years. His passion for smooth instrumental music can be traced back to his roots growing up on the windward side of Oahu. Although formally trained with jazz and classical music degrees, his melodic style has always been influenced by the sounds of the Hawaiian slack key guitar, delivering a soothing yet uplifting blend of romantic favorites and original compositions.

In addition to performing extensively across the country, Ki has contributed to many film and television soundtracks. He can be found performing every Wednesday evening during ‘Wineaux Wednesday’ at Sound Bites Grill.

Eric is a romantic Latin guitarist, and a local favorite. After traveling throughout France, Italy, England, and Ireland – Eric learned and experienced each nation’s culture and beautiful music. It was when he arrived in Spain that he fell in love with the art of Flamenco Guitar. Best known for his Latin Jazz music, Eric has written numerous songs and has many albums. He has also written music for film and television.

So, what do you get when you couple a talented acoustic guitarist and ukulele virtuoso with a multi-talented Latin Flamenco; Bossa Nova and Brazilian Jazz guitarist? Pure musical magic. Both Miller & Ki on guitar create a sensational two-man acoustical jam performing jazzy pop infused music, both original and popular covers. The duo performs every Thursday night from 6-9 p.m. on the Sound Bites Grill Stage.

Scandalous Hands is a four-piece rock band out of Prescott. The band started to come together in October of 2016, when Troy Schilperoort, Adam Haar, and Dennis Messenger began working on a set of musical material that could incorporate funk grooves, jazz harmonic structures, and the exploratory improvisation of jam bands. Shawnee Snaketail soon joined the group on drums, completing the band’s roster. Since then, Scandalous Hands continues to grow, debuting new material with each performance, and unleashing an explosive inventiveness in their covers of familiar classics. The band performs Friday night from 7-10 p.m. in the Sound Bites Grill Celebrity Showroom.

Jazz up your Saturday night on Nov. 14, as the Chris Counelis Jazz Quartet takes the stage at the Sound Bites Grill from 7-10 p.m. Enjoy an evening of sizzling progressive jazz grooves by this fantastic jazz quartet featuring Chris Counelis on saxophone, David Vincent Mills on keyboard; Troy Perkins on bass, and Kevin McQuaid on drums.

From an early age, Chris Counelis has been steeped in Jazz and Big Band music. He studied at Berklee College of Music while still in high school and attended the University of North Texas for four years majoring in Jazz Performance. David Vincent Mills on keyboard, is a jazz pianist, composer, recording artist and producer. As a solo artist, Mills performs original compositions and his arrangements of jazz standards and contemporary classics. Troy Perkins is the most versatile and sought-after bass playing musician in the Verde Valley. His father was a bass player and composer, so Troy was raised with a bow in his hand. Additionally, Troy makes bass guitars, the list of his talents is quite long. The newest band member is Kevin McQuaid – a super talented and versatile drummer. Whether it be jazz, rock, or acoustic ensemble, McQuaid is the go-to percussionist adding the right beat to the Quartet.

Sunday Jazz Brunch from 9 a.m. to noon features the smooth sounds of Solomon Morris on acoustic guitar as he sets the mood playing a variety of favorites from George Benson to The Beatles.

Solomon studied jazz guitar from age 19-23. Listening to him play, it’s hard to believe he put the guitar down for over 30 years in pursuit of gaining knowledge of all kinds.

Solomon earned a BA in classical languages: Arabic, Latin & Greek. He married, and became Muslim in 1976, and then went on to become a teacher of English Literature, Math, Elementary Spanish, Arabic & Latin. Morris worked as a GED teacher for 10 years. He has written four books on the Arabic Language.

It was at the age of 54 that he finally picked up the guitar again, and for the love of music, he left his profession of teaching and began playing in the streets of New York City – gaining recognition from restaurant & club owners.

In 2014, Solomon moved to Arizona with his wife and grandson. He began busking in Uptown Sedona area for over two years, then became the house musician for Mariposa & Cucina Rustica. His musical influences are Wes Montgomery, Joe Pass, George Benson, John Coltrane, Bach, Beethoven and Glen Gould.

Rounding out the week on Sunday evening from 6-8 p.m., is a rare and special performance by The Blazin’ M Cowboys (from the Blazin’ M Ranch) for one last time as they take the stage in the Sound Bites Grill Celebrity Showroom to perform their award-winning Country Western Music Show.

This celebrated Country Western show had been previously performed at the Blazin M Ranch in Cottonwood and has entertained thousands of fans for over 25 years.

Meet the band: Jim & Jeanne Martin are one of Cottonwood and Sedona’s local’s favorite talented couple and have performed together for over 31 years. In 2010, they were recognized by the Western Music Association as Harmony Duo of the Year. In addition, they have also been honored six times as Harmony Yodeling Champions of the Western Music Association.

Originally from Seattle, band mate Bill Bassett honed his craft by writing, recording, and playing in clubs and concerts throughout the United States, eventually making the move to Nashville, and toured the country supporting many country legends. Pedal steel became his primary instrument, but he is equally proficient on lead guitar, mandolin, and banjo. Bill joined the Blazin’ M Ranch in 2005 as the Master of Ceremonies, leading the Blazin’ M Cowboys through their nightly shows, playing pedal steel guitar, mandolin, banjo and lead guitar along with the rest of the Blazin’ M crew of Jim and Jeanne Martin, and Tom Jepperson as Otis.

In 2018, The Blazin’ M Cowboys Band, as well as individual members of the Cowboys, harmony and yodeling champions Jim & Jeanne Martin, and emcee, vocalist and steel-guitar player, Bill Bassett, were inducted into the Greater AZ Country Western Swing Association Hall of Fame.

This talented and beloved local band will have their last performance together on stage as they say ‘happy trails’ to band member, Bill Bassett, who is moving to New Zealand.

As a bonus - world renowned speed painter, Randall Hedden, will delight guests as he joins the band on stage for a moment in time, to perform magic on canvas.

Sound Bites Grill is located at The Shops at Pinon Pointe in uptown Sedona (across from the Hyatt Residence Club).

Sound Bites Grill is a Sedona Safe.Clean.Ready business, adhering to Sedona mandated Covid-19 safety practices and protocols – for a list of their procedures check out the website at soundbitesgrill.com/covid-19-safety-protocol/.