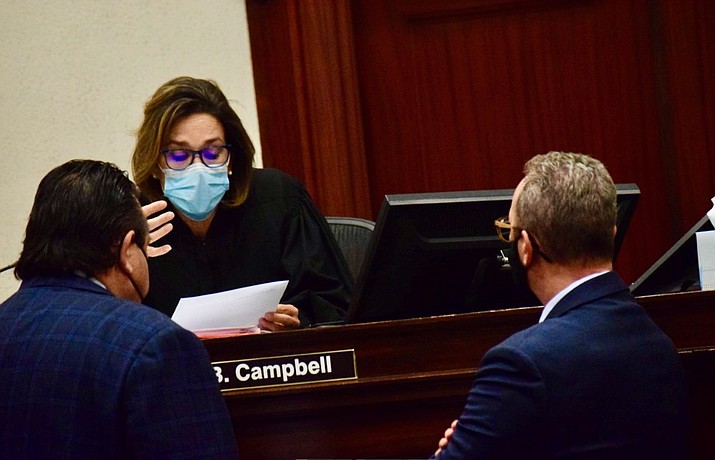 PRESCOTT — Deliberations began mid-afternoon Thursday in the murder trial of a man accused of killing his ex-girlfriend more than 23 years ago.

Judge Jennifer B. Campbell gave the jurors their final instructions just after both attorneys completed their closing arguments Thursday afternoon in the trial of Cecilio Cruz, formerly of Cottonwood.

No announcement of a verdict was made Thursday evening. The jury will resume deliberations Friday morning and will continue those on Monday, Nov. 19, if a verdict is not reached Friday.

The jury is to decide if Cruz is guilty of second-degree murder of his ex-girlfriend, Marisol Gonzalez, and manslaughter. She was past nine months pregnant with a son, Andrew, when she was shot in the head once in March 1997.

The closing arguments took place after a lunch break. Thursday morning, the defense called a family witness who had visited the area, and Cecilio Cruz also took the stand in his own defense.

Tuesday, afternoon, Judge Campbell announced the trial was moving far ahead of schedule. Set for three weeks, the trial moved through all prosecution witnesses by Tuesday morning, and defense attorney Alex Gonzalez began calling his witnesses.

Gonzalez called only two witnesses Thursday. The first was Maribel Castillo Esquer, who, with her husband at the time, Eduardo Castillo, visited family in Cottonwood around the date of the murder.

Even though she wasn’t initially interviewed by police, Castillo Esquer testified before a grand jury in 1998said Thursday she and her husband saw a couple in the dark, along Birch Street, between 13th and 14th streets, but couldn’t see who they were.

The people were facing away from her and her husband, so they couldn’t see their faces.

Cruz, taking the stand in his own defense, said that in late March 1997, he and his then-girlfriend, Kylee Oso, had been working at the Cottonwood Walmart for about one week when the murder happened. He said he had to take time off from work and catch a ride from Oso’s brother to a doctor’s appointment at a doctor’s office.  It turned out Oso and Marisol Gonzalez both had appointments that day in the same office. Cruz described the awkward moment when he and Oso saw Gonzalez and her sister, and after nervous laughter between he and Oso, Marisol Gonzalez became upset.

Gonzalez was beyond 36 weeks of pregnancy during that appointment. Young, the prosecutor, established in his closing arguments that after the appointment, said the plan was for Gonzalez to return the following day to have labor induced.

She was murdered sometime that night of March 24-25.

Oso testified earlier in the trial that she was about three months pregnant. Cruz confirmed, to Young, in court Thursday that Oso had known she was pregnant via a home kit and the doctor’s appointment was to confirm the pregnancy.

Gonzalez asked Cruz if appearing upset during initial police detective question, the morning Gonzalez’s body was found. He asked if he was upset because it was obvious police were involved because something bad had happened to the mother of his child. Cruz said yes. Cruz also said he felt sick to his stomach during the interview.

Young pointed out that Detective Dan Pastre’s observations were that Cruz was nervous during questioning, that his hands were sweaty and he backed away from the detective.

Young questioned Cruz on which guns were in the family home and at one time. Cruz said there was a handgun among them, but he wasn’t sure of the exact make, type or caliber.

A juror asked Cruz, when a call first came into the house that Gonzalez was missing, why he didn’t get out of bed and go help search for her.

“I didn’t know what was going on,” Cruz replied.

In closing arguments, Young pointed out that no guns were found at the Cruz home after the crime, rather than simply none resembling the small-caliber weapon used to kill Gonzalez.

Young also pointed out the cordless phone Gonzalez took outdoors with her the night she was killed was found 2.5 blocks away from her body. The phone, when hitting redial, dialed the Cruz residence.

Young said an examination of the Cruz home’s caller ID log showed no calls after 8 p.m., suggesting someone had erased calls witnesses had testified they had made to the number later in the evening.

Two neighbors told police they heard a gunshot; both attorneys acknowledged that testimony. However, in their questions for Cruz, and, later, in closing arguments, differed on what they think those reports, and the attempts by visitor Samantha Weldon Evans to visit Cecilio’s brother, Danny, mean to the case.

Gonzalez said the fact Cruz heard the family Rottweiler barking while chained up out front, combined with how Cecilio Cruz later paged Weldon Evans to let her know he was at the house, establish his alibi.

Young countered that Cruz didn’t page Weldon Evans until 1:10 a.m., giving him what seems like a reasonable amount of time to commit the murder, dispose of the phone and the weapon and be back home.

“What makes more sense?” Young asked the jury, rhetorically. “That Marisol Gonzalez was murdered by a scared 17-year-old, who had two girls pregnant at the same time, or, in her ninth month, in sweats and slippers, wanted many feet down the alley from her home, and was shot in either a robbery or an assault?”

Gonzalez said the lack of a murder weapon being found is one of many important reasons why jurors should acquit Cruz.

“They don’t have a gun; they have a theory,” Gonzalez said. “Theories aren’t evidence.”