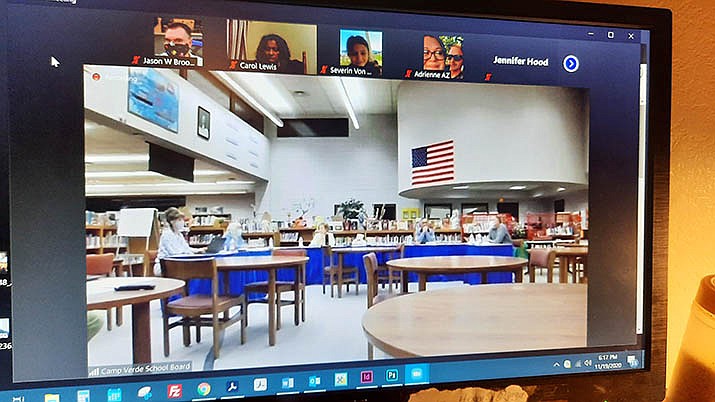 The Camp Verde Unified School District Board of Education decided to continue offering in-person learning as an option for students Thursday. Courtesy of Camp Verde Schools

After a discussion lasting about 70 minutes, Board President Tim Roth took an informal vote, 4-1 in favor of keeping campuses open to students.

Helen Freeman — one of two board members to vote against the district’s “Return to Learn” optional on-campus plan in August — led much of Thursday’s discussion, including bringing up several statistics and safety concerns. Of particular concern was Yavapai County being in the “red” area in total cases per 100,000 residents, as of the two-week period ending Nov. 3. Yavapai had 133 cases per 100,000 residents for that time period.

Thursday morning, the Arizona Department of Health Services announced 4,123 new cases of COVID-19 statewide, along with 19 deaths. More than 6,300 Arizonans have died of COVID-19, ADHS says.

“I spoke with a doctor in Cottonwood, and I was told we’re very close to where we were during the early summer spike,” Freeman said. “The Return to Learn plan we voted on in August was to get kids — some kids — back on campus. We haven’t really revised that plan or come up with an ongoing set of contingencies — what we’ll do if we or the county hits various numbers.”

Board member Eric Lawton also voted against implementing the Return to Learn plan in August. He, like Freeman, wants to see the district create more metrics or other standards by which the campus would remain open, and how the district would change and alter its safety protocols and methods on the fly.

Lawton said he found it discouraging that when he and his wife attended a recent school volleyball match, there was no signage requiring masks or other COVID-19 protocol in or near the area of the gym they were in, or at the entrance. He said they noticed at least one other couple and a Verde Independent reporter wore face coverings, but masks were not prevalent in the facility.

There are 41 people with COVID-19 who are being tracked within the district, Roth said, and 26 have returned to school.

On Nov. 13, the Verde Independent reported 36 COVID-19 positives have been reported in Camp Verde Unified since school reopened Aug. 17.

Freeman pressured her fellow board members about showing more reaction to what she said are widespread student, staff and parent concerns.

“We have to do something,” Freeman said. “We have to show that we care. We should do something to alleviate the anxieties of those who are concerned.

When Roth pressed Freeman for what should be done, she said she wished the conversation had taken place at the board’s Nov. 10 meeting.

“We could have canceled school in the days leading up to Thanksgiving, and had a thorough deep cleaning done at each site,” she said.

The other three board members were not swayed by Freeman’s and Lawton’s appeals for either closing the campuses or, to an extent, coming up with a more detailed plan. The board agreed to direct staff to more aggressively implement and enforce recommended CDC measures to slow the spread of COVID-19.

“I think the whole thing is overblown,” Roth said regarding the spike in COVID-19 cases.

Council member Bob Simbric called into the meeting from Florida, where he is visiting family.

“Here, it’s a different world from Arizona,” Simbric said. “Covid doesn’t seem to be much of an issue in this state.”

Board member Carol German said she doesn’t feel the per-100,000 county virus rate is enough reason to shut down any campuses.

“I just don’t feel it’s gotten to be a crisis, at this point,” German said.

Roth said he doesn’t have kids on an Arizona public school campus because he doesn’t want them to wear masks. Simbric said his relatives moved to Florida for the same reason.

The board praised the staff for its hard work, creativity and dedication to keeping campuses safe. German said she is especially impressed with how teachers have managed to serve both in-class and online students, often within the same exact time blocks.