Kids can send letters through Santa’s mailbox in Cottonwood 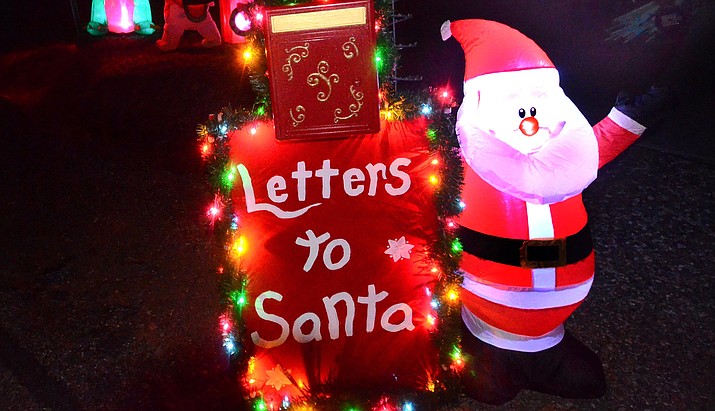 Santa’s elves Matt and Tony Meili-Petzoldt have placed a mailbox to Santa in front of their Cottonwood home on South Desert Flower Circle. VVN/Vyto Starinskas

There’s a magical mailbox right in the Verde Valley where children can send a letter to Santa.

And if you go at night, you will be transformed into a world of holiday lights and Christmas wishes.

Don’t be surprised if you see a couple of Santa’s elves, Matt and Tony Meili-Petzoldt, adjusting the decorations or letting people know what channel to tune in their car radios to for Christmas music.

Matt said the couple has been decorating their house to celebrate the holidays for years, but this year they decided to help Santa get letters from children in the area.

They set up a special mailbox in front of their home, and children who drop off a letter to Santa will get a response from the Big Guy.

The U.S. Post Office has set up a similar program this year in which postal customers can go to a website and choose children’s letters for Santa respond to.

“We did our first drive-up light show with music you can hear in your own car radio. With everything going on in the world this year my husband and I wanted to make this year’s light show even better,” Meili-Petzoldt said.

Matt said they also do the display as a way to help the Verde Valley Sanctuary. “We ask for donations of new kid’s toys, diapers,” Meili-Petzoldt said. “But it’s not required by any means.

“The letters-to-Santa drop-box idea came from the same idea of making this year better and creating a few more smiles, especially for our younger ones,” the Santa helper said.

“They lost their schools, their friends, their teachers and a bit of their independence by having to stay home so much.”

If a child does leave a return address, the two elves will have Santa mail them back. They cannot make any promises for Santa, they tell parents, and are vague, (wink wink).

“I fear 2020 took the kids’ voices away. So I thought that by a child writing a letter to Santa might help even one child feel like their voice has been heard,” Meili-Petzoldt said.

Look for the elves.