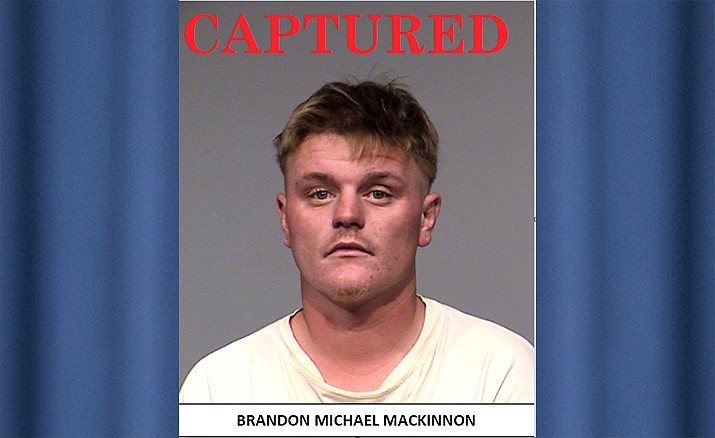 COTTONWOOD – The man believed to be responsible for the Sept. 28 hit-and-run of a Cottonwood bicyclist was arrested Friday after he was captured by local citizens.

According to a news release from Cottonwood PD, Friday at around 5 p.m. police received a tip on the location of Brandon Michael Mackinnon.

The news release states the reporting party said Mackinnon was located in the 500 block of East State Route 89A.

“When officers arrived, Good Samaritans had Mackinnon pinned down to the ground so he couldn’t leave prior to law enforcement’s arrival,” the news release states.

Mackinnon was taken into custody and booked into the Yavapai County Detention Center for aggravated assault with a dangerous instrument (vehicle), criminal damage and leaving the scene of an accident with injury, all felonies. He was also charged with misdemeanor reckless driving. Mackinnon is currently in custody on a $25,000 bond.

Mackinnon was wanted for his involvement in a hit-and-run investigation after he allegedly struck a bicyclist during the morning hours of Sept. 28 then fled the area in his truck. His truck was later located abandoned. The 65-year-old male cyclist is recovering from broken bones and numerous scrapes, bumps and bruises.

The accident occurred near the intersection of North Willard Street and North Main Street in Cottonwood.