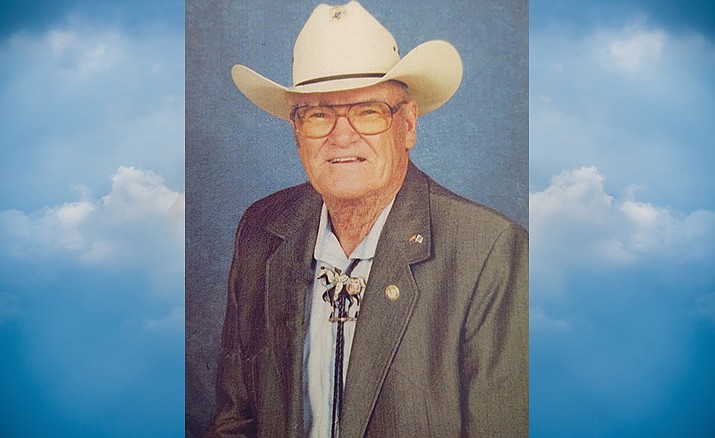 With heavy hearts and deep gratitude, Camp Verde bid farewell to one of her finest citizens, as Howard Parrish was called by God to rest with Him on October 3, 2020.

His many years of service to the community have helped to shape our town, as well as family and will continue to set the example for years to come.

Howard Eugene Parrish, known better as “Uncle Howard” to almost everyone, was born on April 27, 1928 in Pernell, Oklahoma to Winnie Ecskin and Georgia Margaret Parrish.

He graduated high school in Whittier, California and then proudly served in the US Army, assigned to post-war duty in Japan.

After an Honorable Discharge, Howard returned to California, where he soon met and married the love of his life, Betty McDonald on August 15, 1948. They spent the next 72 years together, attributing their happiness to a simple truth. In Betty’s words, “we might have argued, but we never fought!”

Howard and Betty made Camp Verde their home in 1953 and he quickly became an integral part of the community. Howard established the Fort Verde Calvary in 1957, a registered non-profit organization which has become well known for its public service.

Among its many accomplishments, Howard was instrumental in establishing the annual Colonel’s Daughter competition and, in 1998, the re-establishment of The Historic Mail Trail that runs from Camp Verde to Payson.

Howard was elected to the Camp Verde Town Council, leading efforts to influence Planning and Zoning guidelines that would poise the community for growth while preserving its small-town character.

Howard had a very successful career, which enabled him to provide for an extended family that consists of nieces, nephews, grand-nephews, and their children.

He and Betty are well-known for taking in any person who needed a helping hand, making everyone they met a part of their extended family.

He worked in highway maintenance with the Arizona State Highway Department, and later joined the McDonald Construction where he worked until his retirement.

After retirement, Howard continued to create opportunities for himself and others through real estate investments, farming, and raising livestock.

Howard is survived by his loving wife, Betty; his sister, Yvonne Biglow; his niece, Susie and her husband, Ronnie Kirk and their children, Kevin and William Kirk. Howard and Betty shared their home with William and his wife, Crystal, as well as their children, Cheyenne, Austin and Will Jr., and recently welcomed their great-grandniece, Oaklynn Grace Dunning.

The family requests that, in lieu of flowers, donations to the Fort Verde Calvary would be greatly appreciated. Condolence may be shared at www.buelerfuneralhome.com.