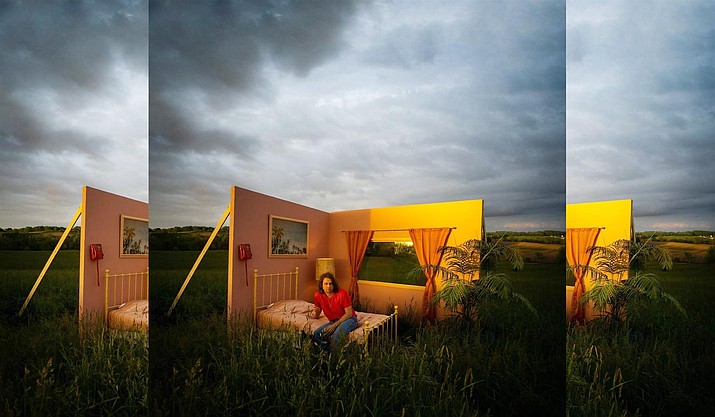 In the winter of 2017, Kevin Morby moved back to his hometown of Kansas City from Los Angeles.

“The move was sudden and unforeseen, just as I was tying a bow on the writing process for what would become my 2019 album, Oh My God,” He said.

“I bought a Four Track Tascam model 424 off of an old friend to help me get to the finish line, but much to my surprise and excitement, this new piece of equipment in my all-but-bare home didn’t help complete one album but rather inspire another: Sundowner. The new collection of songs came quickly and effortlessly as I did my best not to resist or refine the songs, but instead let them take shape all on their own. As the songs kept coming I cleared out the crowded shed that was sitting dormant in my backyard and built a makeshift studio before adding drums, lead guitar and piano to complete the demos. Each day I would teach myself basic recording techniques, watching the channels illuminate and pulse as if the machine were breathing.”

Amidst the backdrop of a global pandemic, political unrest, and wildfiresraging across the western United States, Josh Klinghoffer hunkered down and found the inspiration to complete the sophomore album for his latest project, Pluralone.

The release, aptly titled “I Don’t Feel Well,” comes on the heels of Pluralone’s critically acclaimed debut album, “To Be One With You.”

In some ways, “I Don’t Feel Well” seems like a natural progression of the Pluralone project, just as dynamic and fluid in it’s arrangements, but more focused in it’s execution.

Similar to “To Be One With You,” Klinghoffer leans heavily on piano and keyboards for the foundation of most songs, with some outliers such as the anthemic guitar-heavy track, ‘Mother Nature.’

Tracks include: Red Don’t Feel, The Night Won’t Scare Me, Carry, The Report, Steal Away, Mother Nature, Knowing You.

The Struts’ new album, Strange Days, will be released on Oct. 16. The band, who had not been together since

With a cover of KISS’ “Do You Love Me.” Mixed by Claudius Mittendorfer.

The band’s influences include Queen, the Darkness, the Rolling Stones, Aerosmith, Def Leppard, the Killers, the Smiths, and Oasis.

Tracks: Am I Talking To The Champagne (Or Talking To You), Strange Days.

Sign is comprised of 11 songs with a runtime of 65 minutes and 32 seconds.

Autechre is an English electronic music duo consisting of Rob Brown and Sean Booth, both from Rochdale, Greater Manchester.

Formed in 1987, Autechre is one of the best known acts signed to UK electronic label Warp Records, through which all of Autechre’s full-length albums have been released beginning with their 1993 debut Incunabula.

Autechre gained initial recognition when they were featured on Warp’s 1992 compilation Artificial Intelligence.

Influenced by styles such as 1980s electro-funk and acid house, the music of Autechre has evolved throughout their career from early, melodic techno recordings to later works often considered abstract and experimental, featuring complex algorithm-generated production and few stylistic conventions.

Their work has been associated with the 1990s electronic genre known as intelligent dance music (IDM), though Booth has dismissed the label as “silly.”

Gord Downie – Away Is Mine

Away Is Mine is a new solo album by the late Gord Downie, iconic frontman of The Tragically Hip.

Presented as a double album with electric and acoustic versions, the 20-track collection highlights his poetic mastery with vibrant yet haunting production.

The songs written by Gord hold fast to his unwavering artistic spirit, deft hand with words and forever inscrutable sense of humor.

This is a 2CD release housed in mini-gatefold packaging. Includes foldout poster with Downie’s handwritten lyrics, and an essay.

The project was laid down at the Tragically Hip’s studio in Bath, Ont., in July 2017, three months before Downie died from glioblastoma, a rare and incurable form of brain cancer.

In addition to his career with the Tragically Hip, Downie released seven albums, including Coke Machine Glow, The Grand Bounce, Secret Path, a collaboration with the Sadies, And the Conquering Sun, and Introduce Yerself.

Tracks include: Hotel Worth, Useless Nights, I Am Lost, About Blank, River Don’t Care, The Least Impossible, Away Is Mine.