Combs opts out of Mingus football game due to COVID 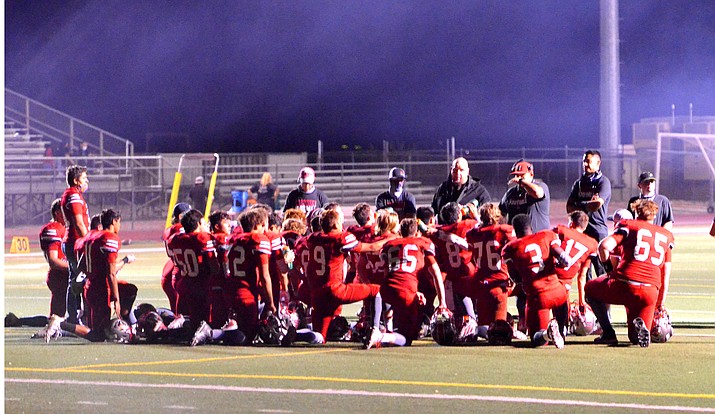 The Mingus Marauders will take the field Friday at 7 p.m., but against a replacement opponent after Combs High School canceled due to a COVID-19 outbreak at the San Tan Valley high school. VVN file photo

“We were informed today of individuals who tested positive for COVID-19 who were last on site at the high school on Tuesday, Oct. 13,” the statement says. “Upon notifying the Pinal County Public Health Department, we were directed by public health officials to temporarily close Combs High School beginning Thursday, Oct. 15, until Oct. 27, at the earliest.”

The district said the decision to close the school was made by the Pinal County Public Health Department due to the number of staff and students required to quarantine, and not due to the number of positive cases reported. The district said the high school identified two or more people who are confirmed to have positive COVID-19 cases this week, though it didn’t state an exact number.

“We are told by Pinal County Public Health that this is considered an outbreak,” the district said. “For privacy reasons and in observance of guidance from public health officials, we are unable to share additional details about individual cases.”

The announcement came hours before the Arizona Department of Health Services released its biggest one-day spike in announced COVID-19 cases in almost a month. Thursday, for the first time since Sept. 18, ADHS reported more than 1,000 new COVID-19 cases in a single day.

The Thursday morning report from ADHS shows 1,113 new cases in the state from Wednesday’s total, combined with 17 deaths.

Mingus Union football coach Doug Provenzano said the Marauder players were disappointed, but not surprised. Cancelations have been common this fall due to COVID-19 – even with the late start to the season.

“We were really hoping to play a competitive game this weekend, and we had to figure that out today,” Provenzano said Thursday morning. “You don’t want to be in a situation where there’s an outbreak that ends or breaks up much of the season, and you didn’t give your kids all the safe, competitive opportunities they could have had.”

The Marauders didn’t have another week to insert a game. Their seven-week schedule has no byes in it, with the playoffs to start immediately after the regular season ends.

Mingus is set to host Bradshaw Mountain on Friday, Oct. 23.

River Valley finished 7-3 last year, 3-1 in the 3A West Region, and was eliminated in the first round of the Class 3A state playoffs. The Dust Devils lost to Valley Christian Academy, 41-18, to start this season, and beat Kingman Academy, 56-0, last Friday.

The Verde Independent could not immediately determine why River Valley had an open slate this weekend.