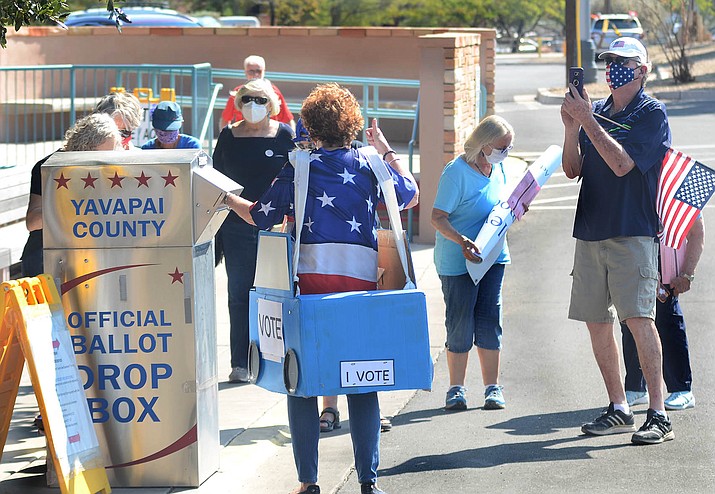 People in about 45 vehicles took part in a Parade to the Polls on Tuesday morning. They drove to the voting ballot boxes in Cottonwood and Sedona to generate “enthusiasm and awareness” for early voting and that ballot boxes are safe, according to organizers. VVN/Vyto Starinskas 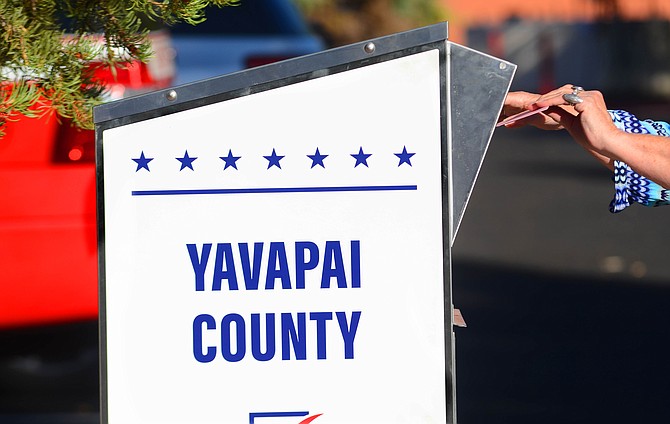 Six new voting ballot boxes have been installed in Yavapai County including this one at the Oak Creek Fire Station, Leslie Hoffman, Yavapai County Recorder, announced earlier in October. Using these boxes to drop off your early ballots saves the county 60-cents per ballot in tax dollars, she said. VVN/Vyto Starinskas

YAVAPAI COUNTY - About 8.5% of Yavapai County votes have been tabulated in the first week of voting in the 2020 presidential election.

“We have accepted back in 11,466 ballots,” explained Laurin Custis, registrar of voters for Yavapai County. There are 6,000 more ballots awaiting verification, she added.

The county mailed out 134,124 ballots to voters on the permanent early voter list and those who made their first early ballot request.

“We are busy at our two locations for early voting,” explained Custis. “We have had 2,084 voters vote early in-person. It’s pretty steady all-day long.”

Custis there they have had some lines at the polls, but no irregularities.

“We are seeing a huge uptick in the use of the drop box,” explained Custis. “Which is great. That’s saving 60-cents per ballot,” as opposed to routing ballots through the U.S. Postal Service.

There’s been a bit of a traffic jam at the Prescott office with people trying to get in to use the drop box.

Custis said they always have a high-usage of the drop boxes, but “I can tell you what we are seeing are higher numbers.”

The other thing Custis is seeing is that people are voting early. “They are really wanting their ballots to get in early. And that’s great.”

More people have voted this year than the election four years ago in the State of Arizona, explained Arizona Secretary of State Katie Hobbs during a media call Wednesday.

Hobbs didn't know exactly how many people have voted this election. "More than they had at this point in 2016," Hobbs said during the call on Zoom.

Custis said 81.3% of the voters in Yavapai County are on the permanent early voter list who get mail-in ballots or early ballots. A small percentage of voters receive one-time mail-ballots.

There has been a slight uptick in the number of voters asking for mail-in ballots for this general election, but there was a huge increase for the August primary, she said.

“We have early voting going on here in two locations, one here in Prescott and one in Cottonwood,” Custis said.

The Monday before Election Day is reserved for emergency voting, and voters will have to fill out an affidavit to vote that day in person. “It switches from Early Voting to Emergency Voting” for those who can’t vote on Election Day. Election Day is Tuesday, Nov. 3.

She said a lot of people have been showing up at the outside ballot boxes and taking pictures of themselves for social media.

There are no pictures allowed in the polling location, she added, but they can while dropping off a ballot at an outside ballot drop box, Custis said.

“No loitering is allowed,” she said. “They have to vote and then they have to leave.”

A voter can check if their mail-in ballot was processed by the Yavapai County Elections and Voter Registration Department a few days after they are mailed by calling their office at 928-771-3248 or going to my.arizona.vote, Custis said.

Custis said they hired seasonal staff for the general election and will be able to handle the extra calls and mail-in ballots.

“We just want people to vote early so we can get ahead of this,” she said.

Custis is encouraging people to use the 13 voting drop-boxes around the county. Here are the Verde Valley locations.