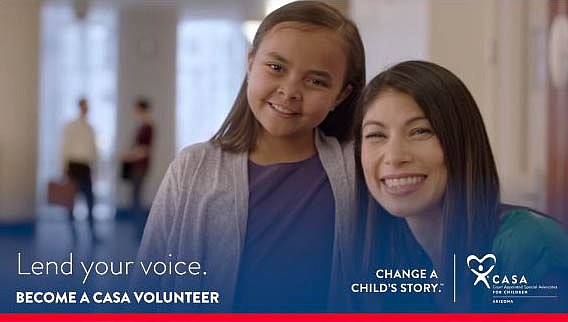 CAMP VERDE — Court Appointed Special Advocates (CASAs) have been standing up for children in Arizona’s foster care system for 35 years.

CASA volunteers are everyday people who get to know the children they are appointed to, talk with everyone involved in the case and help judges identify the best outcome for the child.

More than 25,000 children in Arizona have benefitted from having a CASA volunteer on their side.

The CASA program began in Seattle, Washington in 1977 when juvenile court judge David Soukup decided he needed an unbiased source to help guide him in juvenile cases.

Pima County, Arizona started the second program in the nation in 1979 and CASA of Arizona was formed in October of 1985.

Yavapai County began its CASA program in 1989. Over the years, with the increase in population in both state and county, there has been an increase in the number of children in foster care. Today there are more than 450 children in foster care with 75 CASA volunteers who advocate for them. Ideally every child “in the system” would have the support of a CASA volunteer.

There are nearly 1,200 CASA volunteers serving children in Arizona. During the 35th anniversary, CASA of Arizona is encouraging more people to get involved.

For more information about CASA of Arizona, visit CASAofArizona.org.

The CASA program is administered by the Arizona Supreme Court and has programs in all 15 Arizona counties. County programs recruit and train community-based volunteers to speak up for the rights of abused and neglected children in court.

CASA volunteers are appointed by judges to foster children who have the greatest need for an advocate. Volunteers do not provide placement or a home for the child but are strictly advocates who submit their recommendations directly to the judge hearing a child’s case.

CASA volunteers complete 30 hours of training to prepare them for their duties.