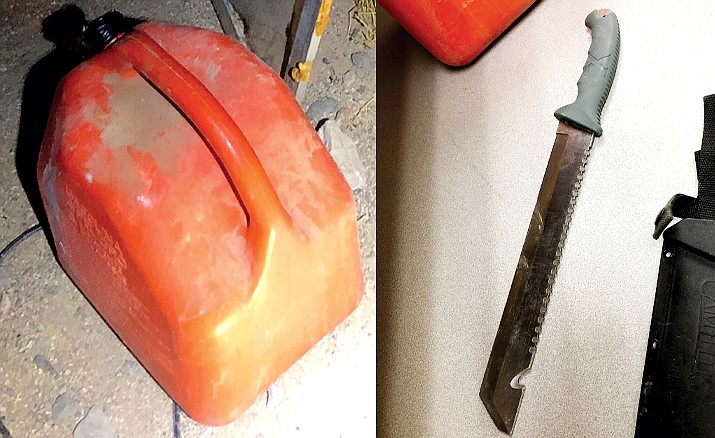 This gas can and machete were found at a Rimrock trailer where the Yavapai County Sheriff’s Office say Jerry Ray Follett, 34, poured gasoline on items inside and on a family member, and tried to light a fire. His charges include first-degree attempted murder. Courtesy of YCSO

RIMROCK – A Rimrock man was booked into the Camp Verde Detention Center over the weekend on attempted first-degree murder and other charges, according to a report from the Yavapai County Sheriff’s Office.

The report said Jerry Ray Follett, 34, poured gasoline inside a home and on a family member and tried to light a fire. He is also charged with attempted arson of an occupied structure, disorderly conduct with a weapon, endangerment, and child abuse. 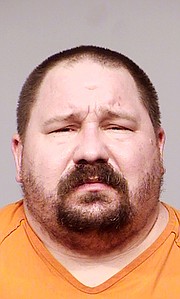 Saturday, Oct. 17, at about 2:30 a.m., according to YCSO, numerous deputies were dispatched to the 5200 block of North Dave Wingfield Road in Rimrock, for a possible arson.

The initial call to YCSO came from a third-party family member, who had received a text that Follett was pouring gas on a trailer and was attempting to light it on fire with his family inside, the report said.

Another family member, who was staying in a separate nearby trailer, told deputies he heard loud music coming from Follett’s trailer and saw Follett pouring gas on both trailers and the surrounding ground.

One of the deputies who responded had spoken by phone with Follett. Follett, YCSO said, was upset about several personal issues and mentioned suicide during the conversation before ending his call with the deputy.

Follett had also been drinking and had threatened “suicide by cop,” the report said.

Family members had moved to safety from Follett’s attempts to burn a trailer they were occupying and waiting at a nearby business for deputies.

Deputies later found the interior of the trailer had also been doused with gas.

Follett had also poured gas on the family member while dousing that trailer and the ground below, the report said.

Both daughters fell into the gasoline when trying to leave, but were forced back inside by their father, the report said. He continued to say that he was going to kill everyone, the family told deputies

At one point, Follett’s family was able to escape to the front yard.

Follett was also waving a silver-colored machete. He wrapped a towel, soaked in gasoline, around the blade and attempted to light it using a stove top burner, but it would not ignite, the report said.

YCSO said Follett left before deputies arrived, telling his family he was never coming back. Deputies discovered he was hiding across the street and convinced him to surrender.

The report said the property and trailer had an overwhelming odor of gasoline. The condition inside the trailer was termed “horrendous” in the report, with feces and urine on the floor along, along with large piles of trash.

Deputies learned that earlier, Follett had a confrontation with his wife, and pushed her to the ground. The Department of Child Safety was notified about the incident for follow-up.