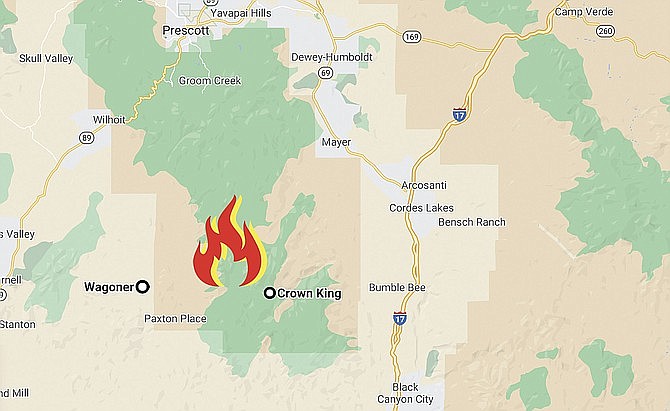 The Horse Fire broke out on Oct. 15, near Crown King, Arizona, a town just south of Prescott. Fire officials have determined it was human caused and is under investigation. Prescott Daily Courier map

Cause: Human, under investigation

CROWN KING — Thanks to efforts by firefighters on the ground and in the air, the Horse Fire had little growth over the last few days, according to a South West Area Incident Management Team 2 news release Thursday morning, Oct. 22.

"There was very little growth if any yesterday," said Operations Section Chief Rick Miller during a video update Thursday morning. "There was just a few smoke columns coming out of there and they were all white, which in indicative of just maybe ground fire."

The smoke can be seen on the northeast corner where smoldering continues as heavy dead and down trees continue to burn.

Firefighters continue to hold the fire to the west of FR 52/Senator Highway. Two dozers and a road grader are being used improved FR 52 and have created contingency fuel breaks around the community of Crown King. Crews also continue to provide structure protection for homes in the area, Miller said. Because of these efforts, the fire has not had any growth in the direction of Crown King or Towers Mountain.

Firefighters are strengthening firelines and extinguishing hotspots along the southern tip and eastern side of the fire. The west side of the fire is secured. Crews are also working the north end of the fire in preparation of the upcoming weather changes and the possibility that the fire could start moving north, Miller said. High temperatures will drop at least 15 degrees in the coming days and through the weekend until Monday.

There is a chance of light showers on Sunday or Monday and potential for snow above 6,000 feet.

Minimal fire activity is expected as the cold front moves in but it will bring increased winds each day, with gusts up to 35 miles per hour by Saturday.

Colder temperatures and higher humidity decrease chances of fire spread in fine, grass vegetation; however, heat remains on the north and northeastern side where dry and dead timber continues to burn.

The fire will smolder, and smoke will be seen in those areas as pockets of interior vegetation continues to burn.

Pointing to past fire areas on a map, Miller explained that "We are really strategically going to take advantage of some of these old fire scars that are out there that will not support fires. So we are going to herd it into some of these other fire scars if the fire continues to move to the north."