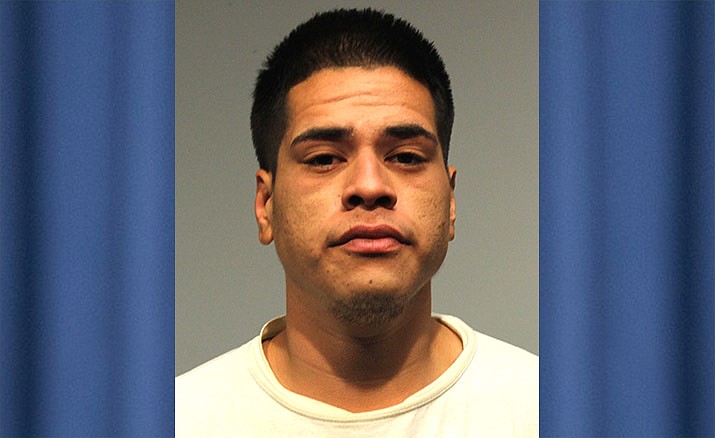 VERDE VILLAGE – A Phoenix man was arrested Wednesday after he allegedly stole a pickup truck that had a 4-year-old child inside, police said.

Miguel Antonio Ochoa, 25, was booked into the Camp Verde Detention Center on charges that include vehicle theft and kidnapping, according to a Yavapai County Sheriff’s Office news release.

A man who is the owner of a white 2016 Dodge Ram truck told police that Wednesday, at about 7:30 a.m., he stopped at the Quick Country Store on Western Drive, just off State Route 260, in Verde Village. He parked at one of the gas pumps and entered the store, leaving his 4-year-child in a car seat inside the running vehicle.

While still in the store, he wanted to pay for gas, but forgot the pump number. When he looked outside, the truck was gone.

A witness told the owner they saw a suspicious man in pajama pants in the area. The witness did not see this person get inside the truck, police said.

A short time later, the truck was found in the middle of the road on State Route 260 at Out of Africa Parkway, with the engine still running.

The child was still inside and unharmed and was secured in a sheriff’s vehicle with a deputy. A witness told deputies they had seen the victim’s truck driving at high speed on State Route 260 and stop at the Out of Africa roundabout.

The suspect exited the truck and walked north across the highway into the desert, the witness told police.

Several deputies immediately began a search of the area, including Old Highway 279, which parallels 260 to the north.

One of the deputes drove to an elevated position off of State Route 260, in the vicinity of the suspect’s last known location, and saw a silver Dodge pickup pulling a trailer, leaving a ranch, heading toward Cottonwood.

A deputy, who was on Old Highway 279, stopped the truck, which had two men inside.

The passenger was wearing a blue sports coat, no shirt and pajama bottoms. He was identified as Ochoa.

The driver of the truck claimed Ochoa had just approached him for a ride and he did not know him otherwise.

Ochoa was interviewed. He admitted to the theft of the truck, police said, which he noticed was running with the keys in the ignition.

Ochoa told police he was trying to get to Phoenix after being dropped off earlier and stranded by his girlfriend. He said that when he noticed the child in the truck, he stopped, got out, and fled on foot.

The Phoenix resident was also found in possession of a piece of tinfoil with burnt residue and a straw determined presumptive for fentanyl. Endangerment and possession of a controlled substance are also on his list of charges.

Ochoa remains in jail and bond has not been set as of this writing.