On masks, Biden calls out Ducey, who responds 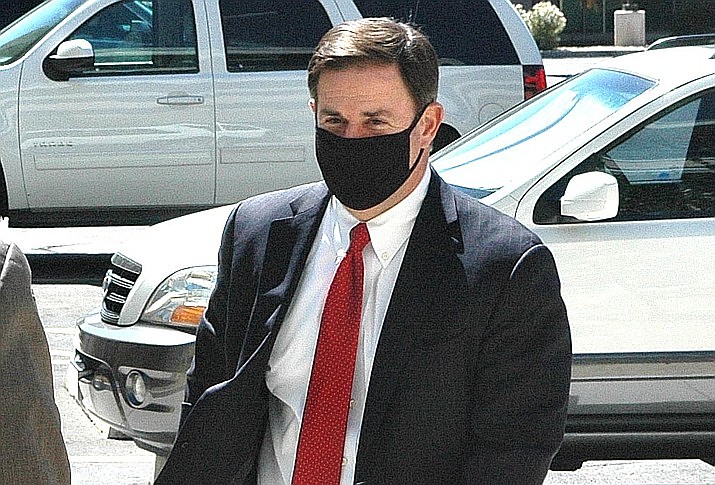 At a press conference in Delaware Friday, Biden said it was Ducey's refusal to require masks -- and even blocking a local option -- that led to a spike in COVID-19 cases in Arizona in June.

"Just look at what happened in Arizona,'' the vice president said in a report aired by KTAR Radio. "Republican governor initially tried to bar local governments from implementing mask mandates in their communities.''

The governor, responding through his Twitter account, defended his decision to keep local governments from acting on their own.

"Arizona's economy is recovering faster and stronger than states that took the extreme approach,'' he wrote. "Unemployment is down, and jobs are growing.''

And the mask issue?

"When mayors later asked for the ability to enforce mask mandates, I responded swiftly -- issuing an executive order allowing them to do so,'' Ducey said.

Several mayors, including Tucson's Regina Romero, repeatedly asked Ducey for months for permission to impose their own mask mandates. The governor balked, saying he did not want a patchwork of local regulations.

With no response, on June 17, Romero announced she would amend her own emergency declaration to make it mandatory to wear masks in public. That would have triggered a legal fight, forcing the issue into the courts and putting the question of Ducey's authority over cities in question.

Two hours later, Ducey backed down and agreed to the local option he had until then opposed.

In fact, that was the first of several steps that the governor had to take in backtracking on his efforts to reopen the Arizona economy.

In May, citing a reduction in infections, the governor eased some of the restrictions from his initial emergency declaration in March. That, however, resulted in a huge spike, hitting 5,460 new cases on June 29.

"We're fixing it'' the governor said when asked if he screwed up in letting bars reopen six weeks earlier.

That trend did not go unnoticed by Biden.

"In June, Arizona got hit with a surge of cases,'' the vice president said.

"Hospitals were flooded,'' he continued. "The state health system was overwhelmed.''

Biden isn't the only one who has mentioned Arizona and its handling of the coronavirus. But the conclusions were vastly different. On Thursday, at the end of the second debate, President Trump weighed in.

Figures from the state Department of Health Services show a big decline after that June 29 order.

But the trend has again been on the upswing in the past month. On Oct. 19, the state posted 1,127 new cases, a figure not seen since August.

Ducey has said that there is no need for a statewide mandate. He said that, even with masks only a local option, those rules cover 85% of the population.

But that trend may be reversing, with three Mohave County cities rescinding their mask mandates just this month.

The governor also has not been wearing any sort of face covering in the series of events he has had with the president in his Arizona campaign stops.