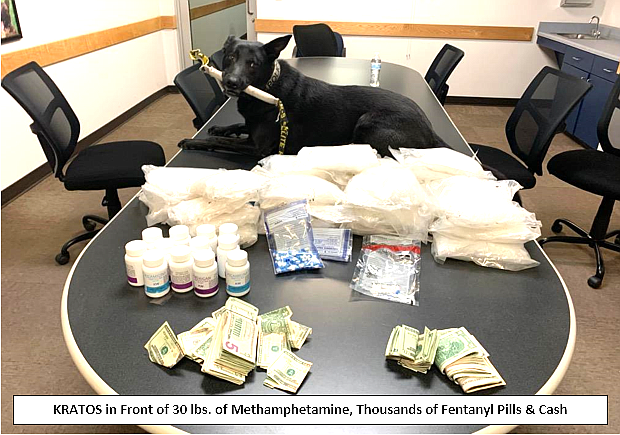 The Cottonwood Police Department’s K9, Kratos, poses with drugs seized during a recent traffic stop. Police say a man from Phoenix and a man from Mexico were in a vehicle that turned out to have 30 pounds of methamphetamine and thousands of fentanyl pills with a combined street value of between $200,000 and $300,000. Courtesy of Cottonwood PD 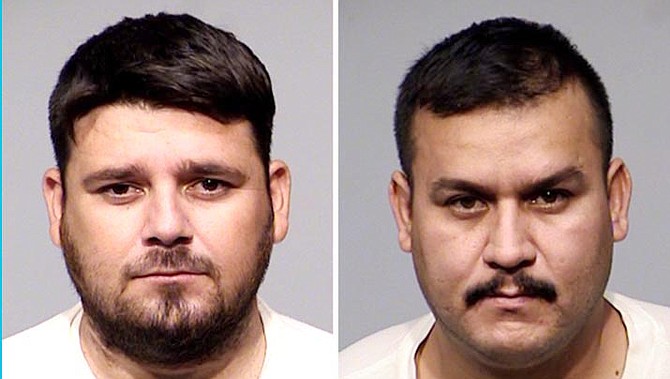 COTTONWOOD – Two men were arrested earlier this month during a traffic stop that the Cottonwood Police Department says involved the seizure of drugs worth more than $200,000 in street value.

Both were booked into the Yavapai County Detention Center for several drug-related felonies. They were still in jail as of Oct. 29.

Officers from the Cottonwood and Williams departments were working highway interdiction on I-17 at about 4:30 p.m. on Oct. 7. They stopped a black 2010 Honda four-door sedan for criminal speed — 90 mph in a 75 mph zone — northbound at about milepost 272, near State Route 169, according to the news release.

The driver presented a Mexico driver’s license that identified him as German-Barraza. He was asked to step out of the vehicle but fled on foot shortly after he stepped out, as did the passenger.

Both were apprehended a short time later, police said.

The news release said that during a search of the vehicle, the officers located about 30 pounds of methamphetamine, thousands of fentanyl pills and more than $3,600 in cash.

Even though all of the drugs were located inside of the vehicle, both men denied knowledge of the drugs, police said.

Both German-Barraza and Cuadras-Cuadras are in jail on $65,000 paper bonds.