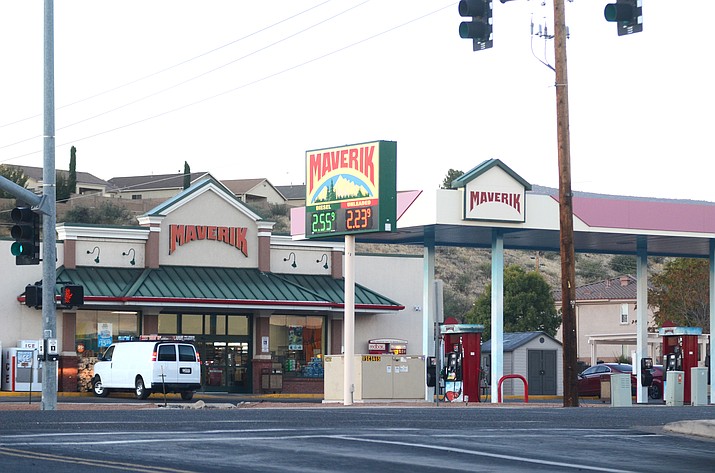 A third suspect, a 14-year-old Yavapai-Apache boy, is still under medical care at a Phoenix Hospital from gunshot wounds suffered in the incident, CVMO said Thursday in a news release. Charges against the boy are pending further investigation.

At about 8:20 p.m. Oct. 27, deputies were called to the Maverik store in the 500 block of Finnie Flat Road for a report of shots being fired, according to an Oct. 28 Marshal’s Office news release.

Upon review of surveillance video, the marshal’s office explained that the Sedona man, identified as Christian Michael Price, pulled up to the gas pumps, got out, and began filling up when he was approached by the 16-year-old and 14-year-old on foot.

“Video showed that some type of confrontation had occurred between Price and the 14-year old,” CVMO stated. “Shortly afterward, the 14-year old male pulled out a handgun and began firing at Price.”

The marshal’s office stated that Price also pulled out a gun and returned fire, and that both were struck and retreated.

“Price was able to make it back to his vehicle and drove off,” the Marshal’s Office stated. “The 14-year old male stumbled to the sidewalk area outside the store.”

“He was located later that night, brought to the office and was interviewed by detectives and then eventually arrested and charged. He was transported (Wednesday) during the morning hours the following day.”

Price was later found outside a Circle K convenience store a few blocks away and treated by medical personnel, CVMO stated.

Price was treated by medical personnel and was later flown to a Phoenix hospital for further treatment.

Thursday, Price was treated and released from the Phoenix Hospital, then arrested and charged with weapon misconduct, aggravated assault, and narcotics violations, all felony charges, according to CVMO. Price was booked into the Yavapai County Detention Center.

According to CVMO, the 16-year-old boy was arrested and charged with weapon misconduct and narcotics violations, both felonies.

“At this point, I cannot confirm nor deny whether (the 16-year-old) had a gun,” Butler said. “I can’t tell you why he was (charged with weapon misconduct). After the Investigations Unit interviewed him, charges came out.”

The Marshal’s Office said the investigation is ongoing and follow-up is being conducted by the CVMO Investigations Unit, along with the Yavapai County Attorney’s Office.

The teen was booked into the Yavapai County Juvenile Detention Center.

The Marshal’s Office said Thursday that the investigation is ongoing.