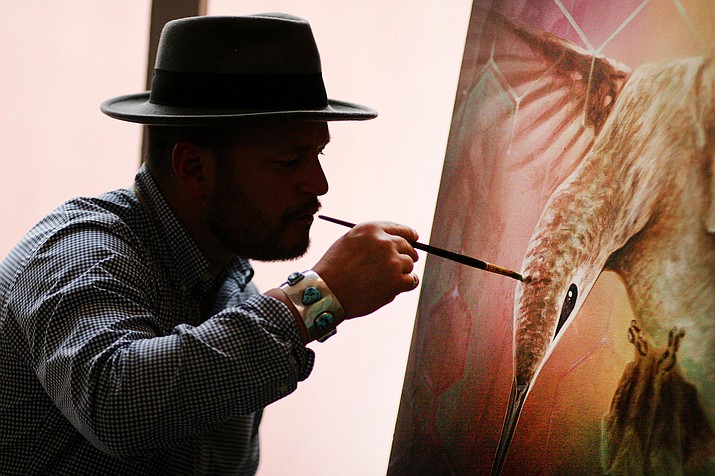 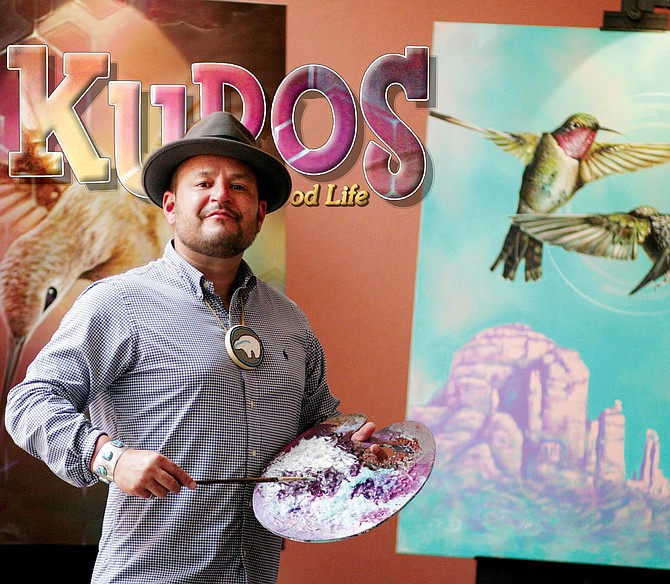 Hummingbirds are an important part of Charles Decker’s work. Decker is currently working on a hummingbird piece. VVN/Bill Helm

It wasn’t that long ago when Charles Decker was a young man who wanted to belong.

A surrealist painter, guitarist, an abstract thinker with many solutions for life’s obstacles, Don Decker taught his son Charles a lot about art.

“Art for me is a way to identify, a way to connect with myself, my communities and my spirituality,” Charles Decker said. “With this spiritual motivation, it has allowed me to connect with people interested in my art who share a commonality of inner growth and reflection.”

Since late-2017, Decker has been artist-in-residence at Enchantment Resort’s Mii amo Spa, located in the Boynton Canyon part of town. Decker can be seen in the spa, working on his latest piece as he prefers oils and acrylics on large-scale canvas.

“Here, I create my works live, while lecturing about the history and culture of the area to world travelers,” Decker said. “I also network through my website and social media.”

Decker said he is very optimistic about the now, as well as future possibilities of networking with upper echelon galleries and propelling forward into the contemporary Native American Indian art scenes across the nation.

“People always ask why I have yet to join the Smithsonian, or shows like the Heard Museum (and the) Santa Fe Indian Art Market,” Decker said. “It’s because I have just simply been busy doing what I do.”

Decker’s father isn’t his only role model. He also learned about art from his mother, Christy Sargent, who in the 1960s was an abstractionist who worked with spray paints. Sargent now works with water colors – and is a poet.

After school, Decker spent several years performing live art at electronic music festivals across Arizona and Colorado. At that time he mostly worked with high-end acrylic spray paints combined with acrylic and paintbrush.

In 2010, he began to feature his work at the Goldenstein Gallery in Sedona. In 2011, Decker began to study with local Hopi artist Gerry Quotskuyva. Decker described Quotskuyva as a highly skilled, cultured and contemporary artist who is business savvy.

“Gerry has always been two steps ahead of everyone else in the art business world, and I continuously learn from him,” Decker said. “He gave me inspiration and guided me into a more professional path at a pivotal point in my career.”

Decker expanded his artistic abilities during his mentorship with Quotskuyva. He also learned about the business part of art.

“As I watched Charles develop in his career, not only did his creative and technical abilities refine, but his independence from the traditional pursuits of art sales gave him more freedom to continue on an upward path,” Quotskuyva said. “It’s a slower process, but he will rise higher in the art world for this.”

Decker has come a long way in his journey as an artist. As he matures, he said, so does his color palette.

“Infusing vibrant, bright colors mixed with texture and imagery within my composition consisting of a vast spectrum of subjects,” he said.

Space paintings of planets and robots, to gorillas wearing gold chains and baseball caps, his work before 2010 looks nothing like the cultural motifs of his art today that are culturally driven and meant to inspire spiritual strength.

“Keeping Apache traditions alive through telling stories on the canvas of connections with the land and creator,” Decker said.

One evolves, one grows, and so does one’s art. For Decker, the evolution began in 2010. As an enrolled member of the Yavapai-Apache Nation, Decker said his Apache (Dilzhe’e) culture and identity have always been an important part of his spirit.

“Maturing through life peels my eyes open time and time again, causing a movement within to seek and understand a universal connection from my Apache ancestors’ knowledge and ways of life,” Decker said. “A people who truly knew what it meant to live freely of the land in this area less than 150 years ago, a time that didn’t have a scientific explanation for crackling lightning and roaring thunder.”

What his art says

Art is a reflection of the artist, a self-portrait if you will. For Decker, it’s his life experiences and emotional roller coasters that influence what he creates.

“As an artist, being both an introvert and extravert, I am very aware of my surroundings and interactions with people,” he said. “I don’t just hear what people are saying, I listen to their eyes, body kinetics, and tones of their voices. I tend to analyze what and why things happen. Through passion, love, wonder, excitement, strength, unity, optimism, comfort, calmness, tragedy, sadness, fear and loss we all grow. Taking notice of these steps in life, I try to philosophize in my own mind and heart for positive outcomes. My art and energy is a contemporary abstract and surrealism in which I am hinting at spirituality and inspiration through Apache culture. Age, wisdom, growth, unfoldment.” Decker explained that with his art, he seeks connection with his relatives, his Yavapai-Apache tribal nation, as well as community members.

“Art is a method for me to be understood, connect, and a medium for me to not feel so isolated,” he said.

Several of Decker’s pieces are on display at Enchantment, including the spa’s boutique and library, as well as the resort’s marketplace. Earlier this year, one of his paintings was purchased and installed into the National Congress of American Indians Embassy located near the White House in Washington D.C.

“It is an honor to represent my people at that level,” he said. Also, one of Decker’s paintings is scheduled to be installed at the National Indian Gaming Associations headquarters office in Washington D.C. on Capitol Hill.

Decker is also looking for additional galleries with which to partner.

Jim Root finds serendipity in that Decker recently finished a hummingbird painting and is working on another at Mii amo.

Before they met, the spa’s general manager had put bird feeders, hummingbird feeders to be exact, outside Mii amo.

“What I really enjoy is that he’s been exploring hummingbirds,” Root said. “They’re not birding pictures, but hummingbirds of an energetic and symbolic perspective.”

For Root, Decker is more than an artist. He is an ambassador.

“He’s very proud of his heritage, and he’s also very proud of his family,” said Root, who also serves as Enchantment Group’s director of wellbeing. “At Mii amo, there’s a strong sense of place a spirit of place. Charles honors the tradition that is there. He’s been a great resource. He’s been incredibly helpful to me.”

The help has been mutual, Decker said.

“The resort I feel helps preserve Boynton Canyon,” Decker said. “Tribal members are always welcomed with open arms to journey into the canyon. I have seen a genuine eagerness and pride from them toward wanting to bridge cultural gaps and embrace an ethical and harmonious environment.”