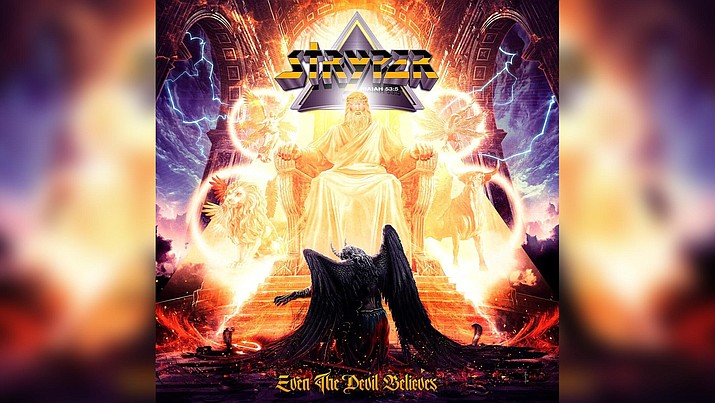 Stryper – Even the Devil Believes

Christian rock band Stryper is set to return Sept. 4 with the release of its 13th studio album, Even the Devil Believes.

The band has announced the album’s first single, “Blood From Above.”

Stryper is renowned for its distinctive brand of “heavenly metal,” extraordinary crossover success and venerable endurance.

The group ascended to prominence in the 1980s with Billboard Top 40 hits like “Calling on You,” “Honestly,” and “Always There for You,” and has maintained a global fanbase ever since.

Stryper is the first band to ever have two songs in MTV’s Top 10 simultaneously with their hits “Free” and “Honestly.” To date, the Dove Award-winning and GRAMMY-nominated band has sold over 10 million albums worldwide.

Tracks include: Blood From Above, Make Love Great Again, Let Him In, Do Unto Others, Even The Devil Believes.

Legendarily recorded in a single day in October 1969, Black Sabbath’s self-titled debut was released on a Friday the 13th in 1970, and the world was never the same.

“We recorded a live EP and were wondering what we could do next as a cover band, so the 50th album anniversary came just at the right time,” explains Blasko regarding Zakk Sabbath’s decision to go studio.

“Compared to ‘Paranoid’, which is almost like a best-of record, the bulk of the material on ‘Black Sabbath’ is deep-cut, really experimental stuff that was never thoroughly explored, so that was a challenge, not to forget that we wanted to meet our own high standards.”

Tracks include: Black Sabbath, The Wizard, Wasp / Behind the Wall of Sleep / N.I.B, Wicked World, A Bit of Finger / Sleeping Village / Warning.

The Pineapple Thief – Versions of the Truth

Versions Of The Truth creates a conceptual progression from Dissolution - a contemplation on our ‘post truth’ world. Lyrically the album tackles a more personal reflection on how there can be more than one ‘version of the truth’, the impact it can have on our lives and the people we love.

Versions Of The Truth is Gavin Harrison’s second album as a full creative member of The Pineapple Thief alongside Soord, bassist Jon Sykes and keyboard player Steve Kitch. His presence has again helped bring writing and recording into sharp focus.

Tracks: Versions of the Truth, Leave Me Be, The Game, Our Mire, Demons, Break It All, Too Many Voices, Stop Making Sense, Out of Line, Driving Like Maniacs.

Six of the seven include bonus tracks, with single versions, non-album tracks and some alternates.

The bonus eighth CD is an unreleased recording of the band’s Dec. 15, 1974 concert at The Record Plant in Sausalito, California.

Tracks include: Coming Your Way, Closing My Eyes, Show-Biz Blues, My Dream, Underway, Oh Well, Although The Sun Is Shining, Rattlesnake Shake, Searching For Madge, Fighting For Madge, When You Say, Like Crying, Before The Beginning.

The Rolling Stones‘ 1973 album Goats Head Soup will be reissued as a super deluxe edition box set in August.

The 3CD+blu-ray package will offer a brand new stereo mix, a 5.1 surround and Dolby Atmos mix, a disc of rarities and alternate mixes and the much desired ‘Brussels Affair’ concert, recorded live at the Forest National Arena in October 1973 is reissued on CD for the first time outside Japan.

The super deluxe edition (or should that be souper deluxe?) includes a 120-page book, which sounds McCartney-esque in style, with loads of photos and three essays: 50 Years On – An Appreciation of Goats Head Soup by Ian McCann, Brussels Affair Live 1973 Tour by Nick Kent and The Story Of The Cover Art by Darryl Easlea.

This set also includes four 1973 reproduction tour posters which are rolled up, not folded.

Interscope will also release a 2CD and single CD option.