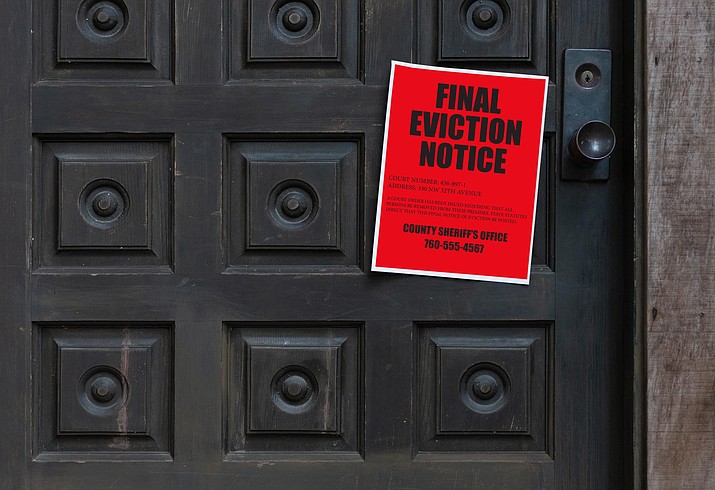 A new federal directive could provide Arizona renters with new protections even if the state Supreme Court rules that an anti-eviction order by Gov. Doug Ducey is illegal and unenforceable.

PHOENIX - A new federal directive could provide Arizona renters with new protections even if the state Supreme Court rules that an anti-eviction order by Gov. Doug Ducey is illegal and unenforceable.

And it would be in place for a longer period of time.

The order, by the Centers for Disease Control and Prevention, prohibits millions of renters from being ousted from their homes or apartments due to nonpayment of rent.

It is far more expansive than earlier federal directives which had covered only federally financed rental units. The conditions to get the relief also could be seen as more liberal than those imposed by Ducey in Arizona.

And this new order goes through the end of the year; Ducey's executive order expires at the end of October.

The action comes just weeks after President Trump directed the CDC to study the issue. But the president, facing a tough reelection bid this year, moved to take full credit.

"I want to make it unmistakably clear that I'm protecting people from evictions,'' he said in a prepared statement.

It also comes as the Arizona Multihousing Association is trying to convince the Arizona Supreme Court that it should override the governor's own similar directive. Attorneys for the landlord group contend that the emergency powers lawmakers gave to governors decades ago do not permit what amounts to seizure of property.

But assuming the CDC order is valid -- and there have been no challenges filed so far -- it could mean that the Arizona landlords could win their lawsuit and still not be able to evict tenants.

There was no immediate response from either the landlord organization or its legal team.

The new federal directive has a multi-part test to qualify.

First is a requirement that the tenant has "used best efforts'' to obtain all available government assistance for rent or housing. The order, however, does not define what that involves.

Similarly, tenants must make "best efforts'' -- again, undefined -- to make timely partial payments "that are as close to the full payment as the individual's circumstances may permit.''

Also required is a reason for the inability to pay rent, which can be "substantial'' lost of household income, loss of work hours or wages, a lay off, or "extraordinary out-of-pocket medical expenses.'' That last category includes unreimbursed medical expenses likely to exceed 7.5% of an individual's gross income for the year.

Finally, there is a requirement for an applicant to say that eviction likely would leave the person or family homeless or, at the very least, force them to live "in close quarters in a new congregate or shared living setting.''

That last provision could provide the legal underpinnings for the order to be considered valid.

"Housing stability helps protect public health because homelessness increases the likelihood of individuals moving into congregate setting, such as homeless shelters, which then puts individuals at higher risk to COVID-19,'' the directive states. More to the point, it says that the ability of these facilities to do things like social distancing and other infection control measures decreases as crowding increases.

As with Ducey's own order, the CDC says none of this removes the legal obligation of anyone to pay rent or other financial obligations under lease agreements. And it allows landlords to collect late fees, penalties and interest.

But it means that, at least through the end of the year, failure to do that won't put an individual or family onto the street.

That income figure for eligibility, according to the CDC, is not arbitrary.

The agency cites a national study showing that someone would need to be earning about $49,837 a year to afford a two-bedroom unit without spending more than 30 percent of income on rent.

Ducey's own executive order has a separate list of what can exempt a tenant from being evicted.

Factors include the need of someone diagnosed with COVID-19 to be quarantined, having health conditions that put them at higher-than-average risk for contracting the disease, or substantial of income.

But there is a workaround for landlords to the Arizona order. It allows a judge to order an eviction when it is "necessary in the interest of justice'' or for other violations of the lease, like lying about the number of occupants, pets, income, employment or a criminal record.

But in a prepared statement she also called it a "half-measure'' because it simply delays the problem of evictions and provides not financial relief. She urged Congress and the White House to try to iron out differences in a COVID-19 relief bill which she said would provide at least $100 billion in emergency rental assistance.