One vote per voter in Yavapai County in General Election 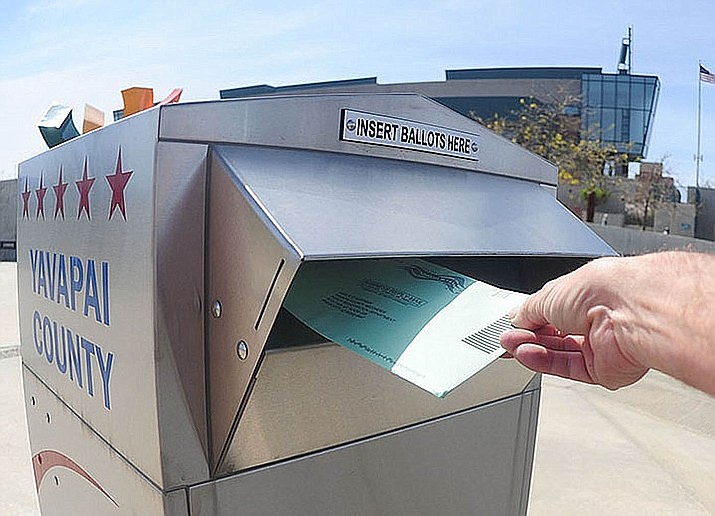 There are 13 voting drop-boxes around Yavapai County.­­­­­­­­ Those ballots go directly to the county recorder and saves the county 60 cents per ballot in mailing costs. Les Stukenburg/Courier, file photo

VERDE VALLEY — Mail-in ballots for the General Election in November will go out Oct. 7 and a system is in place to make sure that no person has two votes in the election, according to Laurin Custis, Registrar of Voters for Yavapai County.

President Donald Trump has suggested that voters mail in their ballots and the check and see if their ballots have been registered. Then vote again in-person if they have not.

Voters who vote twice in Yavapai County will only have their first vote counted, said Custis. She said she would not encourage people to maliciously or randomly vote twice. “That’s against the law.”

Most of the voters in Yavapai County will be getting mail-in ballots and people still have until Oct. 23 to request a mail ballot.

Custis said 81.3 percent of the voters in Yavapai County are on the permanent early voter list who get mail-in ballots. Other voters can get one-time mail-ballots.

There has been a slight uptick in the number of voters asking for mail-in ballots for this General Election, but there was a huge increase for the August Primary Election, she said.

A voter can check if their mail-in ballot was processed by the Yavapai County Elections and Voter Registration Department a few days after they are mailed by calling their office at 928-771-3248 or going to my.arizona.vote, Custis said.

It takes a few days for the ballots to work their way through the system if it’s been mailed, she said. If someone mails a ballot the Sunday before the election, she doubts that the ballot will make it to them on time, so that person may want to go vote in-person, Custis said.

“Whatever ballot that we get in first, is the first one that is tabulated,” she said. The system rejects any attempt to accept the second ballot.

But if a person thinks their ballot is stuck in the mail on the day of the election, they may want to go vote in person, she said. Voters can even call on Election Day to see if they have their ballot, she added.

All Yavapai County mail goes to Phoenix and back so the election’s office is suggesting people mail their ballots as soon as they can.

Custis said they are hiring seasonal staff for the General Election and will be able to handle the extra calls and mail-in ballots.

“We just want people to vote early so we can get ahead of this,” she said.

Voters need to register by Monday, Oct. 5, and they can do it at the Yavapai County administration offices in Cottonwood or Prescott, in person, by mail, or on-line through servicearizona.com. Post offices and libraries have voter registration forms too.

The office is asking that voters not mail in ballots after Tuesday, Oct. 27, or the ballot may not arrive in time to be counted. Late ballots are not tabulated.

Custis is also encouraging people to use the 13 voting drop-boxes around the county. Those ballots go directly to the county recorder and saves the county 60 cents per ballot in mailing costs.

For 27 days, starting Wed., Oct. 7, people can come in and vote in person at the two Yavapai County government buildings at 10 South 6th St., Cottonwood, and 1015 Fair St, Prescott.

“We’re here to serve however any way anyone wants to vote,” she said. “We have many options.”